A priest (and homiletics instructor) sent this my way, and it’s well worth pondering — one man’s reflections on the art of preaching: 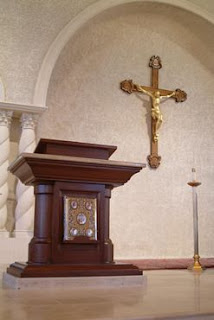 Listening to sermons at Mass, one often thinks, like the professor in the Narnia Chronicles, “What do they teach in school?” Not that the sermons are necessarily all that bad, but they are rarely as good as they would be had the priest been better taught. It’s like listening to a fiddler who hits most of the notes but doesn’t know how to keep time — because, one suspects, he learned the fiddle from an accordion player.

I am not going to deliver the usual lament about preaching (often delivered, a friend reminded me, by lapsed or lukewarm Catholics). When I was an Episcopalian, friends worried that I might become a Catholic always brought up the liturgy and the preaching. Even then this struck me as irrelevant, but they saw the two bodies as brands in competition, and so thought that I was about to spend the same amount of money for a bashed-up Saturn as I would for a perfectly maintained Mercedes. Why endure old Father O’Shea when you can sit at the feet of the Rev. Canon Horace Q. Swizzlestick III, D.D.?

But in my experience of almost eight years as a Catholic, I have rarely heard a genuinely bad sermon, and I have heard a few very good ones. Even some of the most ineptly composed and delivered sermons included some striking insight that redeemed the mess. Perhaps I’ve been blessed — or maybe my standards are low — but I haven’t found Catholic preaching to be the horror show I was led to expect, even by some Catholics. (I hear horror stories, and I’m sure they’re true, but I cannot tell any.)

Some priests only deal with the text when they’re trying to explain it away. Many stick to certain all-purpose themes — “living in community” and “being Christ to the world” are two I’ve heard several times — that produce vague and generic conclusions, which tend to be the same conclusion you heard last week, and in the weeks before that. One rarely gets the feeling that the words of the Word matter. I have heard sermons that offered a deeper, more exacting analysis of a popular song than of the Scripture readings of the day.

Sitting in the pew, I often feel that the priest means well but simply doesn’t see any need actually to prepare his sermon. The false starts, the hesitations, the repetitions, the truisms, the lack of any specific reference to the lessons, the conclusion that just trails off — these all suggest that he spent at most 15 minutes working on the ten to twelve minutes he would be speaking. That is more than a little insulting.

Though I don’t have any horror stories to tell, it’s the general mediocrity (in both the dictionary and popular senses of the word) of Catholic preaching that leaves me depressed. It could easily be much better. The basic skills of preaching are not that hard to teach, or to learn.

On the other hand, Protestant preaching is not necessarily that much better. Since the sermon is so central to their worship, these bodies choose their ordinands partly on their ability to preach and train them hard to do so, but still, this only takes them so far. If you listen to a randomly selected Southern Baptist minister and Catholic priest, the odds are about six to one that the first will be the better preacher, but this isn’t true across the Protestant board.

Visit the link for the rest and see what you think.