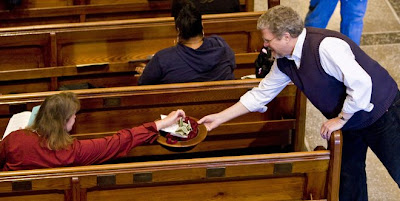 The economic downturn is hitting some churches in their most sensitive area: the collection plate.

From the Milwaukee Journal-Sentinel:

For weeks now, Matt McCarron has been unable to muster the strength to go to Sunday Mass.

A lifelong Catholic, he’s often found solace in prayer. And though young, he tries to give faithfully for the needs of the church, $20 a week when he was employed full time.

McCarron, 19, lost his job as a machinist last month and is back at the pizza joint where he worked in high school. He moved in with his parents to save money.

“I just feel let down,” said McCarron, who’d prayed that God would spare his job and is embarrassed that he can’t support the church the way he’d like. “I’m not sure I can afford even $5. I hate that feeling.”

Like McCarron, many people of faith are struggling, spiritually and financially, as the economy continues to unravel.

Across the religious spectrum, many congregations and faith organizations in southeastern Wisconsin say giving is flat or down, at a time when the need for services, from food and clothing pantries to housing assistance and spiritual counseling, is skyrocketing.

• ?Lakeland Baptist Association, which represents 40 churches in seven counties, saw its member contributions drop 15% in 2008, one of the worst years in the past seven, said executive director Keith Cogburn. The American Baptist Churches of Wisconsin saw contributions from its 60 churches fall 5%, executive minister Arlo Reichter said.

• ?Donations fell 6% last year in the Greater Milwaukee Synod of the Evangelical Lutheran Church in America, with 138 congregations in seven counties, said finance director Dave Groenewold. One-third of the congregations have said they’ll have to cut their 2009 commitments.

• ?The Milwaukee Jewish Federation is projecting a roughly 10% drop in its $8?million Jewish Community Foundation drive, which funds congregations and numerous programs across the community, said Federation executive vice president Rick Meyer. One synagogue reported a 40% drop in its own fund drive, Meyer said.

• ?Within the Muslim community, giving dropped 1% at the Islamic Society of Milwaukee in 2008, from a record year in 2007, according to executive director Isa Sadlon. But at the Islamic Da’wa Center on the city’s north side, donations have fallen as much as 40% in six months, said administrator Will Perry.

• ?The Archdiocese of Milwaukee said it can’t quantify a decline in the middle of its fiscal year, but the Archdiocese’s annual operating fund drive fell 1.4% in 2008, said finance officer John Marek. Anecdotally, individual churches say giving is way off.

“I’m sure the hardest hit are in the central city, but it doesn’t exempt us at all,” said Father John Yockey of St. Jerome Catholic Church in Oconomowoc, where a drop in weekly donations has left the church $65,000 in the red.

“More people have lost their jobs .?.?. some with no advanced warning,” he said.

Continue at the link for the rest.

Meantime, it seems that more women who find themselves in dire economic circumstances are turning to a modern solution: egg donation. 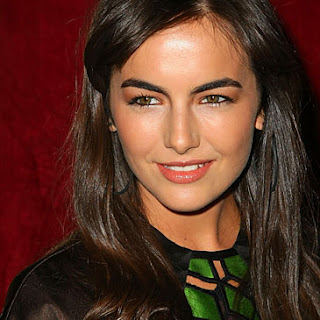 Ladies and gentlemen, the Virgin Mary...
archives most recent
More from Beliefnet and our partners
previous posts