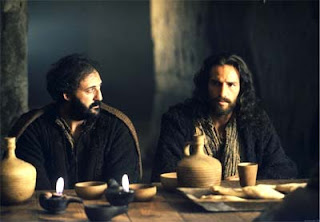 You really have to feel for St. Peter.

A couple weeks ago, we encountered him climbing out of a boat during a storm, trying to walk on water. He floundered, and Jesus had to rescue him.

Then, last week, he ended up with a job he never sought. Jesus gave him the keys to the kingdom and called him his rock. Peter has just gotten used to that idea when, those words still ringing in his ears, he hears the guy who just called him â€œa rockâ€ yelling at him, and calling him Satan.

The apostle must have wondered at this moment, his cheeks burning with embarrassment, â€œWhat in Godâ€™s name does he WANT from me?â€

Itâ€™s a good question. And itâ€™s one a lot of us ask. As we heard a few moments ago, St. Paul had some advice for the Romans: â€œDo not conform yourselves to this age but be transformed by the renewal of your mind, that you may discern what is the will of God, what is good and pleasing and perfect.â€

Which leads us to ask, with Peter: â€œWhat DOES he WANT from me?â€

What IS the will of God?

When he was here in April, Pope Benedict asked a gathering of priests to pray for a special intention of the pope. One of the priests asked him what that intention was. And His Holiness replied: â€œPray that I never get in the way of Jesus.â€

I think it is one way we can strive to discern the will of God.

How can I not get in the way of his work?

What would he have me do? What is â€œgood, and pleasing, and perfectâ€?

In finding the answers, we find Godâ€™s will. And in His will is our ultimate purpose, our ultimate joy â€“ even when it seems otherwise.

In 1995, at the height of the war in Yugoslavia, a nun by the name of Sister Lucy Vertrusc was attacked and brutally raped, repeatedly, by several Serb soldiers who broke into her convent. She ended up pregnant. After many weeks, she wrote a letter to her Mother Superior. It was published in an Italian newspaper and has been widely circulated on the Internet.

Sister Lucy described the physical and spiritual agony she felt â€“ the darkness that surrounded her. All sheâ€™d ever wanted was to be a cloistered nun, living her life quietly serving God and praying to her â€œDivine Spouse.â€ After her rape, in her darkest moments, she despaired of even continuing to live. But she remembered the words of a poet, Alexej Mislovic: â€œYou must not die/because you have been chosen/ to be a part of the day.â€

Sister Lucy chose not to embrace the darkness, but â€œto be part of the day.â€ She wrote: â€œI will fulfill my religious vocation in another way. I will go with my child. I do not know where, but God, who broke all of a sudden my greatest joy, will indicate the path I must tread in order to do His will.â€ She told her Mother Superior she wanted nothing from her order, which had given her so much already.

And she concluded with these extraordinary words: â€œSomeone has to begin to break the chain of hatred that has always destroyed our countries. And so, I will teach my child only one thing: love. This child, born of violence, will be a witness along with me that the only greatness that gives honor to a human being is forgiveness.â€

But I take heart from this: we are all trying to get there. We are works in progress, forever being formed, shaped, stretched, pounded like clay. Forever wondering â€œWhat in Godâ€™s name does He WANT from me?â€

The gospel tells us one answer: to take up our crosses, and follow him. Peter did that. And God knows, Sister Lucy did that â€“ in ways most of us canâ€™t begin to fathom.

The best we can do, in a world as uncertain as this, is exactly what Paul told the Romans: seek to be transformed.

Pray for wisdom, to know what would please God.

Pray for courage, to do as Peter did, and get out of the boat.

Pray for trust, to let God guide us where he wants.

Pray, as Pope Benedict does, to not to get in the way of Jesus.

On my desk at home I keep a prayer composed by Fr. Mychal Judge, the first official casualty of 9/11. Several years ago, I worked on a documentary that showed Fr. Judge, in his last moments, inside the lobby of the World Trade Center, wearing his collar and his firemanâ€™s helmet, his lips moving in silent prayer. (See below.)

I wonder if he was whispering these words â€“ a prayer for faith, for trust, for courage. It gives me great comfort at times when I have my own doubts. When the road seems too long, and the cross too heavy.

This is Mychal Judgeâ€™s prayer.

Click on the image below to see Fr. Mychal Judge, from the documentary “9/11.”