He’s been mentioned on the short list of John McCain’s possible running mates. And now Louisiana governor Bobby Jindal is getting closer scrutiny from the media. 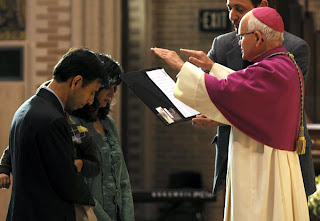 In 1988, 16-year-old Piyush Jindal totaled his father’s new car a few weeks before graduating from Baton Rouge High School. Piyush — who then and now prefers the nickname “Bobby” he adopted from “The Brady Brunch” sitcom — had to assess more than fender damage with his parents.

“Which God do you have to thank for your safety?” Mr. Jindal, now governor of Louisiana, remembers his mother, Raj, a practicing Hindu, inquiring after he escaped from the wreck. For the child of Punjabi immigrants who had announced his Christian beliefs the previous summer, the question was difficult.

Twenty years later, Mr. Jindal, a convert to Roman Catholicism, is being mentioned as one of John McCain’s top choices for the Republican vice-presidential nomination. And his strong religious faith is often cited as a potential bonus for the ticket.

Hinduism is a diverse religion, with varying interpretations. Mr. Jindal, speaking from his office in Baton Rouge this month, said his parents raised him “in a monotheistic home with a firm belief in a God with traditional values — the same sort of values you find in the Ten Commandments and other mainstream religions.” Recalling their religion as “not a faith that was necessarily tied to a particular historical scripture or revelation,” Mr. Jindal said, his parents “made their faith their own.”

It is rare for Hindus to convert to Christianity or any other religion. According to a survey released by the Pew Forum on Religion & Public Life earlier this year, eight in 10 American Hindus who were raised in the faith remain so as adults.

“I did not have an overnight epiphany like so many people do,” said Mr. Jindal, calling his conversion a “very intellectual-based journey,” where he studied countless religious texts. “Given my background and personality, that was an important part of the process.” But, he notes, “I don’t think you can ‘read’ yourself into faith. I had gotten to the point where I knew what history had to say about this person named Jesus and what he had done on Earth. . . . I think at some point you have to take a leap of faith.”

As a teenager, Mr. Jindal said he sought out chaplains at nearby Louisiana State University as he grasped for a religious identity to call his own. During a youth group’s Easter season musical production in 1987 at LSU’s campus chapel, a black-and-white video of the Passion played during intermission. “I don’t know why I was struck so hard at that moment,” said Mr. Jindal. “There was nothing fascinating about this particular video. . . . But watching this depiction of an actor playing Jesus on the cross, it just hit me, harder than I’d ever been hit before,” he said. “If that was really the son of God, and he really died for me, then I felt compelled to get on my knees and worship him.”

“It was liberating,” said Mr. Jindal about his moment. “Up until that point, my prayer life was like a child talking to Santa Claus — making deals with God saying ‘I’ll be good, but this is what I want in return.'” Soon after, Mr. Jindal began to pray and fervently read the Bible, principally parables in the New Testament. “It was like the words were jumping out of the page. It was literally as if it had been written just for me,” he said.

There’s more at the WSJ link.

read next post
The Pope v. The Pill: reaction
archives most recent
More from Beliefnet and our partners
previous posts