The other day I read the news that Tamar Hennessey had died. Don’t be surprised if you’ve never heard of her. She was an obscure figure to most Catholics, but not insignificant. She was the daughter of Dorothy Day.

Long after her mother had died, Tamar remained active in the causes that Dorothy Day championed. She worked tirelessly to help those who were poor, disadvantaged, outcast. She supported the newspaper her mother had founded, The Catholic Worker, and devoted herself to maintaining her mother’s legacy. 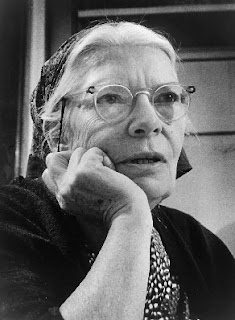 Dorothy Day was remarkable for being both active and contemplative – both Martha and Mary. She prayed the liturgy of the hours faithfully, and the rosary, attended daily mass, and spent many hours in quiet prayer. But she was also there at sit-ins, and picket lines, and protests and rallies. She stood in line at soup kitchens to feed the hungry and wrote a regular column and kept a diary, which has just been published. A priest I know once went to hear her speak and couldn’t help notice that, throughout the whole talk, she kept her arms behind her back. He realized later, she had a rosary in her hands, and spent the entire time fingering her beads. She never missed a moment to pray.

But above all, she was truly a woman engaged with the world.

In Matthew’s gospel, before Jesus ascends, he tells them, very simply, “Go therefore and make disciples of all nations.” He urges them to baptize, to teach, to carry on the work that he has begun. But his first direction is so clear: “Go.” The world is waiting. Act on what I have taught you.

And the reading from Acts even challenges them. As they have watched him disappear into the clouds, two men ask them: “Men of Galilee, why are you standing there looking at the sky?”

The apostles were not supposed to spend their time staring nostalgically at the stars. There was work to be done. They left the mountain, went into the city, and prepared for the phenomenal mission that was about to start – the spreading of the gospel to every corner of the world.

It is tempting on this feast of the Ascension to experience it the way the apostles did, to gaze into the heavens and to ponder the clouds and to pray over the miracle of this great moment.

But Christ’s words to his apostles are words to us all. “Go.” The world will not be converted on a mountaintop. The message will not be spread in the clouds. It will happen in the streets and the synagogues, in public squares and private homes, in books and newspapers and media of all kinds. It needs to be lived in the world.

And that is what the disciples did. That is what Dorothy Day did. They prayed. They read. And then got up and set out into the city, to make disciples of all nations.

In a timely coincidence, the feast of the Ascension falls this year on the feast of St. Joseph the Worker. A lot of us this morning will leave this church and go to work. We have trains to catch and meetings to attend and cranky bosses to deal with and deadlines to meet. But there is other work to be done, too. Perhaps today’s scripture can serve to remind us of the great work of God that all of us are charged with carrying out – the work of living the gospel both in our hearts, and in the world.

How will we fulfill that beautiful work today? How will we transform it into a prayer? How will we heed Christ’s order to “go”? How will we make the ordinary tasks transcend – and ascend? How can we raise our lives to God?

Dorothy Day once wrote: “Our faith is stronger than death, our philosophy is firmer than flesh, and the spread of the Kingdom of God upon the earth is more sublime and more compelling.”

So, do not stay too long on the mountain. The Kingdom of God is waiting to be spread. Sooner or later, we all must turn our eyes from the heavens, and direct them to the earth, and walk back into the world.

Sooner or later, we have to go and make disciples of all nations.

There is no better time than now.