When the CEO is Catholic

It’s not every day that you encounter the CEO of a major corporation who is also a devout Catholic.

But the Associated Press just ran this intriguing profile of the new head of Eli Lilly and Co., and it bears reading:

John Lechleiter could pick any mode of transportation he wants for his commute to the executive suite at Eli Lilly and Co. Most days, he chooses his feet. 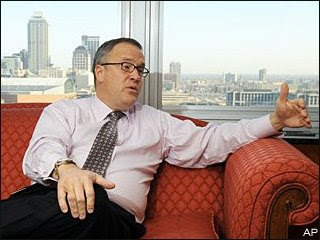 Lechleiter walked briskly through the lobby of his downtown condo on a recent morning, towing a briefcase and attache into the pre-dawn darkness. His mile-plus walk took him through a railroad underpass occasionally frequented by the homeless.

Lechleiter, 54, likes to use these walks to think and clear his mind. He has plenty to ponder these days.

The Harvard-trained chemist takes over as Lilly’s CEO on April 1, succeeding Sidney Taurel, 59, who is retiring. Lechleiter inherits a Fortune 500 company that earned nearly $3 billion last year but will lose patent protection for its best-selling drug, the anti-psychotic Zyprexa, in three years.

Meanwhile, the drugmaker is battling a slumping stock price and, like other pharmaceutical companies, faces growing government regulation and competition from generic products.

Lilly also has had to pay more than $1 billion to settle hundreds of pending claims alleging it downplayed Zyprexa’s side effects and pushed the drug for unapproved uses, charges the company denies.

Lechleiter will be watched closely by Wall Street analysts who have grown impatient waiting for his company to produce new drugs. But he’s anxious to take over.

“As many challenges as we have in this industry today, it’s also a time of tremendous opportunity when you look at how much more we know about the human biology that underlies the mechanisms of disease,” he said.

Lechleiter, most recently the company’s chief operating officer, becomes Lilly’s ninth leader in 131 years, capping a career that began nearly 30 years ago in research labs and wound through sales and marketing.

The new CEO will make an annual salary of $1.4 million. He is also eligible for a bonus of around $2 million, depending on the company’s performance.

His journey to the top is deeply rooted in his Catholic faith and lessons he learned growing up as the oldest of nine children in Louisville, Ky.

Lechleiter remembers the excitement he stirred at home when he won a $300 scholarship to cover a year’s tuition to Saint Xavier High School in Louisville.

“My mother told me later that was the greatest day of my dad’s life because he really hadn’t quite figured out how he was going to swing that, knowing that there were eight others coming behind,” he said.

His parents wound up sending all their children to Catholic high schools and private universities. But the brood grew up modestly.

Lechleiter shared the attic of their family home, which his dad refurbished, with four brothers. Food never stuck around long.

“Dinner was served, breakfast was served and lunch was served,” he said. “But the cookies were gone.”

A large family taught Lechleiter how to negotiate, cooperate and get along with others. It also taught him the importance of education. He tore through high school, taking advanced chemistry, physics and calculus classes.

“He would have had the most rigorous course in every discipline St. X offered at the time,” said Perry Sangalli, the school’s current president. Sangalli graduated with Lechleiter’s younger brother, Richard, who is chief financial officer for Louisville-based Kindred Healthcare.

Lechleiter talks quickly as he feels his way through a point that’s important to him. He uses his hands, leans close to his listener and likes to makes eye contact.

Communication, he thinks, is a crucial part of his new job. He started an in-house blog last summer to talk to employees. He tries to update it weekly with stories and pictures, and he boasts that no corporate communications rep reviews it beforehand.

Check the link for more. He has his work cut out for him.