Who cut the cake?

What could be a better Valentine’s Day gift than to get married?

Earlier this year, I posted a story about a mass wedding in Georgia. Well, they had something similar, on a much smaller scale, in my own backyard just last weekend.

From the Brooklyn Tablet: 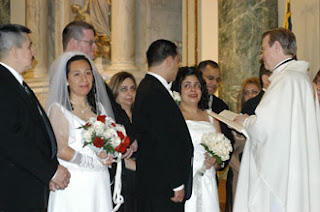 The most romantic day of the year arrived early for five sets of sweethearts who wed at St. Matthias Church in Ridgewood last Saturday, Feb. 9, in anticipation of World Marriage Day and St. Valentine’s Day.

Msgr. Edward Scharfenberger, pastor, officiated over the joint nuptial Mass, said in Spanish and English, and attended by more than 100 guests, who applauded as their children, parents and friends pledged a sacred commitment to each other. A gala followed in the parish hall.

Five-year-old Heidy Loiaza strew red rose petals for her parents Neuton and Elba Miranda, who were the first ones to process through the church. She and other flower girls and pillow boys preceded the brides and grooms who glided down the main aisle to Wagner’s Bridal Chorus just after 2 p.m.

Whether they had been together for three years like Monica Rivera and Domingo Vargas or married civilly for nearly two decades like Jose Luis Ortiz Martinez and Lucila Moran Molina, every couple had decided they were ready to proclaim their love in the eyes of God.

But for these working people who do attend Mass and try to raise their children in the faith, marriage licenses, church fees and a small party were not in the budget when there have been more immediate concerns like grocery, rent and car payments.

All they needed was the right opportunity. That came last fall when Msgr. Scharfenberger announced in the parish bulletin and from the pulpit the annual tradition of the group wedding ceremony. Any couples who were engaged, living together or civilly married were welcome to share together in a group wedding Mass and reception for a fraction of what a traditional wedding would cost.

“We were aware of many people saying they’d like to get married but it’s too expensive,” said Msgr.

Scharfenberger, former head of the Diocesan Tribunal. “We ask only for a free-will donation (to cover church fees) and the reception is $20 per person.”

“We have the celebration of other sacraments together – baptism, communion, confirmation, so why not marriage,” said Msgr. Scharfenberger.

In his homily, the monsignor held up Mary and Jesus as “our example of love and leading one another to salvation.” He told the couples that through the sacrament of matrimony, they are called to be a means of salvation for each other.

He explained how Jesus’ first miracle at the Cana wedding feast is a reversal of man’s first sin in the Garden of Eden. While Eve misled Adam, Msgr. Scharfenberger said, “Jesus knows His mother would never mislead him. Jesus discovers the will of His Father, through woman, Mary, His mother.”

“Mary and Jesus opened the new way,” the monsignor said, to show that “man and woman are for each other.”

While it was a group ceremony, Msgr. Scharfenberger preserved the personal aspect of the sacrament by allowing couples to exchange vows and rings individually. Couples waited their turn and looked approvingly as the couples preceding and following them took the same steps.