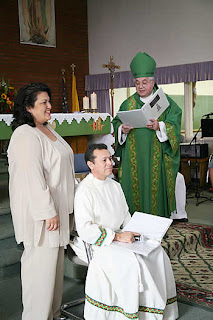 California, birthplace of trends, may have just given birth to another: the first layman has been appointed in Los Angeles to act as a pastoral administrator at a parish:

Like many in his religion, Humberto Ramos prayed regularly for God’s help in relieving the priest shortage plaguing the Roman Catholic Church.

But the father of six never dreamed he would be part of the answer.

On a recent Sunday, Ramos became the first layman in the Archdiocese of Los Angeles to take over the administration of a parish – a role traditionally held by a priest.

“While these are big shoes to fill, I know coming in that this is something where I can contribute and something being experienced across the country,” said Ramos, 42, who will be responsible for the spiritual and pastoral leadership at St. Marcellinus Parish in East Los Angeles.

Ramos’ appointment as a parish-life director was prompted by a significant shortage of clergy, as well as the retirement of the Rev. Jules Meyer, the parish’s previous pastor.

“With the archdiocese now so overwhelmingly Latino, it’s also important that the first lay pastor of a parish happens to be Latino.

Ramos’ appointment also underscores the dramatic changes shaping the Catholic Church. In the L.A. archdiocese, three nuns and a deacon also serve as parish life directors, entrusted with the leadership of a congregation without a resident pastor.

The neighboring Diocese of San Bernardino has some 15 parishes led by nonpriests, according to Ramos.
Advertisement

But the transition to parish-life directors has not been easy. Some U.S. dioceses have chosen to close viable parishes rather than empower lay ministers and deacons.

Ramos was installed in a ceremony officiated by the Rev. Gabino Zavala, auxiliary bishop of the San Gabriel Region.

In his new position, Ramos will oversee the day-to-day pastoral and administrative tasks, while also coordinating and arranging for an ordained priest to celebrate Mass, hear confessions and administer communion and the other Sacraments.

He’ll also participate Sunday in the Feast of the Virgin of Guadalupe celebration in East L.A.

Although pastors normally reside on parish premises, Ramos will continue to live at his home in Temple City. Another priest currently assigned to St. Marcellinus will reside at the rectory.

“The cardinal (Roger Mahony) has said not all priests are called to be pastors,” said Ramos, who has worked for the church almost a quarter-century, including the past 19 years with the archdiocese.

I know of a few other places where this is becoming more common, including a parish not far from where I grew up in Maryland. But I suspect Los Angeles will be in the vanguard; the cardinal archbishop there has expressed an interest in developing this idea, and this may be just the beginning.

Personally, I’d like to see more deacons in this role, as well.

Meantime, the diocesan newspaper has more details about Humberto Ramos’ installation and his family. 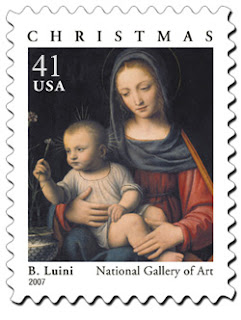