A Trappist monastery plans its future

One of my favorite places to visit and pray has been the Monastery of the Holy Spirit, in Conyers, Georgia — the Trappist house that was once home to Thomas Merton’s censor, and Flannery O’Connor’s peacocks.

Alert readers will note that I visited there just last month, and posted a number of pictures. A good time was had by all.

Now, comes word that the venerable monastery is about to launch a major building campaign, with an eye to a future that may be different from its past, with a new retreat house, gift shop, museum and cafe: 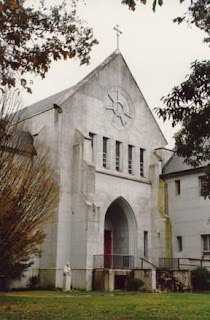 All decisions at the monastery are made by the monastic community, after extensive reflection and discussion.

The idea to go forward with addressing the need for a new retreat house and a new public area has been accepted by the community, the abbot (Francis Michael Stiteler) said.

“There is a unified sense that we are going to move forward and do it. It is embraced by the majority of the community,” he said.

“From my perspective as abbot, this is an unlooked for, or unsought, but necessary occasion to shape our future, not just in terms of sustainability but how we sustain ourselves. This is an opportunity not just to have a new retreat house, but to make it a better experience for the retreatants. … Likewise, we are going to go into it in such a way that we can still remain a cloistered, enclosed community and maybe even better (in sustaining that quality) than in the past.”

The master plan is ambitious sounding, but the abbot is not deterred. Ambitious, in the monastic worldview, is what 21 monks did in 1944 when they were sent from Gethsemani Monastery in Kentucky to found the new monastery on empty pastures in Rockdale County.

“They got driven out here to a barn and had nothing,” the abbot said. “Within 16 years they had built first a wood monastery and then this monastery, which would be worth $30 to $40 million today. Talk about ambitious!”

“I don’t want to downplay $11.7 million. If we can make it less expensive, we certainly will,” he continued. “We need a new retreat house. We need to get our industries in line to support ourselves. … We are certainly not going to do anything ostentatious. Too many people here have a deep sense of simplicity and functionality to let that happen.”

Future phases propose the possibility of building a day use conference center that would allow groups to come in for a daylong meeting or reflection without impinging on the solitude and silence of the retreat house. Also a new building within the cloistered area is proposed where the monks can make the fudge and fruitcake and possibly other baked goods in a modern commercial kitchen. The bakery they now use is about 50 years old. The fudge and fruitcake industries, both of which have been developed since the year 2000, have caught the public’s attention, but have room to grow. Last year the monks made and sold about 10,000 to 12,000 pounds of fudge, but older monasteries have grown their confections into industries that sell 100,000 pounds a year.

The full master plan would also include restoration work to the Abbey Church, built by the monks over a 15-year period, and to other original monastic buildings.

Much change is planned to sustain the community, and the public is encouraged and invited to visit and come to know the monastery. At the heart of the place is an ascetic, contemplative life that still draws people to give everything to God. Their commitment is the heartbeat of the monastery, the hidden life illuminating the beauty of the buildings, the land and the open space.

Check out The Georgia Bulletin for more. Or, better yet, visit the monastery the next time you’re in that neck of the woods, before the future catches up with it.

read next post
He's on the money. This explains why.
archives most recent
More from Beliefnet and our partners
previous posts