Well, here’s something they never covered in homiletics class: what happens if a parishioner sues you for something you allegedly said during a homily?

From the Chicago Tribune:

An Algonquin man is suing a Crystal Lake priest for defamation of character, alleging that the priest insulted and humiliated him during the homily at mass.

Angel R. Llavona, a former parishioner at St. Thomas the Apostle Catholic Church in Crystal Lake, filed a lawsuit Monday in McHenry County Circuit Court, seeking more than $50,000 in damages from Rev. Luis Alfredo Rios, a priest at the church. Also named as defendants are the parish’s pastor, Monsignor Daniel Hermes, and the Diocese of Rockford.

The dispute began last year, according to the suit, when Llavona left a message on Rios’ answering machine, criticizing his homily: “I attended Mass on Sunday and I have seen poor homilies, but yesterday broke all records.”

Llavona attempted to meet with Rios but was rebuffed, the lawsuit states. He left a second message that said, “I came to meet with you and you refused. I am available for dialogue with you. You always say you want people to tell you things in front of you, but today you ran away.”

On Oct. 1, 2006, Rios played the recorded phone message from Llavona during a mass and asked parishioners if “we should send him to Hell or to another parish?” according to the suit.

Llavona, who taught religious education at the church, said he was humiliated and forced to change parishes, according to the suit.

UPDATE: The Chicago Sun-Times has more details, and parishioner reaction:

One parishioner interviewed this week said she was in church when Rios played Llavona’s phone message. She said she had a hard time hearing the message but had only praise for Rios and his abilities as a priest.

“Oh, I love it,” Guadalupe Zambrano, 40, said of Rios’ preaching. “He always talk strong, like he wants to tell everybody how to love God.”

Zambrano said Rios is the kind of priest who encourages parents to take part in their children’s religious education and says it’s clear that Rios prepares diligently for his sermons. “Everything he says in the homily . . . you get it right away,” Zambrano said. 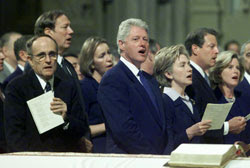 Rudy: turning off Catholics?
archives most recent
More from Beliefnet and our partners
previous posts