Zubik: “I dare you to be excited about our faith” 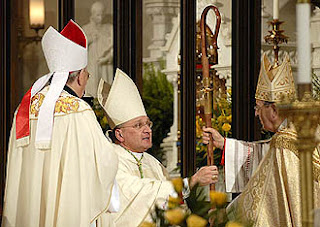 Pittsburgh got her new bishop yesterday, and the local paper has the scoop:

In an address infused with humor, gratitude and Scripture, Pittsburgh’s new Roman Catholic bishop spurred members of his flock to “get excited” about living and sharing their faith each day.

Following his installation yesterday as leader of the Catholic Diocese of Pittsburgh, Bishop David A. Zubik rose to stand above the altar of its mother church and to challenge its 764,000 members to “be excited about our faith, and how we live it.”

“I dare you to join with me today, tomorrow, next week, next month, next year. I dare you to join me in being excited about our faith, not tomorrow but today,” he told more than 1,700 worshippers who crammed pews, aisles and portable chairs to witness the three-hour, tradition-steeped ceremony at St. Paul Cathedral in Oakland.

“May we not put off to tomorrow what God really wants us to do today.”

Bishop Zubik, 58, grew up in Ambridge, served in Pittsburgh as a priest and auxiliary bishop and had been bishop of Green Bay, Wis., since 2003 before returning to replace Donald Wuerl, now archbishop of Washington, D.C.

His father, Stanley Zubik, his aunts, and dozens of other relatives and friends looked on yesterday as he accepted his apostolic mandate, received the crozier, or shepherd staff, that symbolizes his new office and acknowledged “the awesome responsibility to be shepherd of such wonderful people.”

With resonant voice and conversational demeanor, Bishop Zubik cited Scripture and a parable about Satan’s delight over Christians who procrastinate in responding to God’s love and demonstrating their faith. He also set off widespread laughter and applause when he spoke of a story published earlier this week in the Pittsburgh Post-Gazette, which referred to rumored “sanctified scalping” of widely sought tickets for yesterday’s invitation-only installation.

“I knew about scalping, but I didn’t know how sanctified went with it,” he said, smiling. “Then I got really excited, really enthused. If people are scalping tickets to come to church, how much they must be in love with God.”

Bishop Zubik turned serious when speaking of the airplane passenger with whom he’d chatted after flying back to Green Bay from Pittsburgh on the day after his appointment was announced in July. The man watched the bishop pray the rosary, then admitted in conversation that he’d fallen away from the church because he’d never encountered anyone who truly followed Christ’s teachings in day-to-day life.

“Can people who see us day in and day out know without question that we’re proud of our faith, that we’re dependent upon God and that we’re excited about doing his work?”

The bishop exhorted Catholics to seek God’s help during prayer, to stand up for the sanctity of human life and to help the poor and “people on the fringes of society.” He also thanked Archbishop Wuerl for “teaching me what it means to be a man of the church,” and Auxiliary Bishop Paul J. Bradley for his pastoral oversight of the diocese during the 15 months after Archbishop Wuerl’s departure for Washington.

Relatives and friends in the sanctuary smiled and dabbed at their eyes as the bishop spoke of his father and his late mother, Susan, saying they introduced him to God, the church and prayer — “everything important in life.”

“They taught me not only to live, but to love,” he said.

I’m waiting for someone to post the full text of the homily. But it’s Saturday, and I guess the diocese is sleeping in after all the revelry yesterday.

Photo: Bishop David A. Zubik is presented with his crozier during yesterday’s Mass at St. Paul Cathedral in Oakland. Photo by Steve Mellon/Pittsburgh Post-Gazette