The old L.A. cathedral gets a new lease on life — and a new top 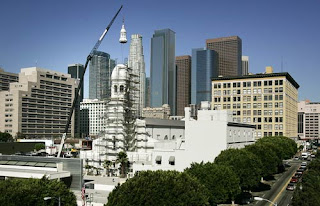 You may have been wondering (as I have) whatever became of the old Los Angeles Cathedral, St. Vibiana’s? I had heard mutterings that it was being restored, but didn’t know much more, so I googled and, behold, up popped this item from just a couple weeks ago, in the Los Angeles Times:

To Los Angeles preservationists, it was the icing on the cake — or at least the tasty, decorative top layer.

A crane gently returned the 3,500-pound cupola to the former St. Vibiana Cathedral on Wednesday, capping an 11-year campaign to save the historic downtown landmark.

“No chunks fell off. If anything, I was expecting lightning bolts to strike,” joked developer Tom Gilmore, who spent $2.5 million to restore the church’s 83-foot-tall bell tower.

The cupola-crowned tower was certainly the lightning rod for a fierce campaign to preserve the 131-year-old church structure after it was targeted for demolition in 1996 by the Catholic Archdiocese of Los Angeles.

The 1,200-seat sanctuary was heavily damaged by the 1994 Northridge earthquake. Church officials decided that repairs would cost more than the Baroque-like Italianate building was worth. They hoped to build a new, larger cathedral.

But it was the sudden dismantling of the cathedral bell tower on a Saturday morning in mid-1996 that prompted a frantic save-the-cathedral campaign.

Archdiocese officials insisted they were only following a city order issued the previous day that called for them to “abate” the imminent danger posed by the quake-damaged tower. Leaders of the Los Angeles Conservancy hastily obtained a temporary restraining order to halt demolition.

By that time, a crane had lifted the 20-foot wood-framed cupola off the top of the tower.

Among a crowd of about 75 people watching the cupola’s return Wednesday was the conservancy’s pro bono attorney Jack Rubens.

On that 1996 day, he persuaded city officials to halt the dismantling on grounds that no demolition permit had been issued. The stop-work order came 20 minutes after the cupola had been pried off the tower.

“They were stripping the interior,” recalled Linda Dishman, the conservancy’s executive director. “Jack got on the phone and found a judge and got a temporary restraining order. We stopped everything.”

For a time, it seemed as though St. Vibiana would not survive.

“The effort to demolish was being championed by the downtown power structure,” Dishman said. “There was such a belief back then that revitalizing downtown meant new buildings.”

Then-Councilwoman Rita Walters, who represented the downtown area, even moved to strip the cathedral of its historic monument status, an action that would exempt the archdiocese from having to prepare the full environmental impact study normally required for destruction of a city landmark.

A state Court of Appeal rejected the archdiocese’s pleas that it be allowed to quickly demolish St. Vibiana, prompting church officials to search for an alternate site for the new cathedral. They eventually agreed to a land swap allowing them to build the new Cathedral of Our Lady of the Angels at Temple Street and Grand Avenue.

Gilmore purchased St. Vibiana in 1999 for $4.6 million. He has spent a reported $6 million renovating it and turning it into a venue for special events and concerts. Gone are its religious relics and materials.

“We’ve had bar mitzvahs and Jewish weddings here,” he said Wednesday of the place now simply called Vibiana. “This is a gift to all of us.”

Cardinal Roger M. Mahony, who presided over the archdiocese during the save-the-cathedral storm, was invited to the cupola ceremony but was unable to attend because of a scheduling conflict, a church spokesman said.

By the way, if you want to book an event there, check out the Vibiana website. It’s really something. Really.