The businessman and the nun

This is one of my favorite stories from the writings of Thomas Merton.

In The Waters of Siloe, he tells the true story of a businessman checking into a hotel in Paris in the days following World War II and, inexplicably, passing a young nun in the lobby:

The nun is smiling…she is a young sister with a bright, intelligent French face, full of the candor of a child, full of good sense; and her smile is a smile of frank, undisguised friendship. The traveler instinctively brings his hand to his hat, then turns away and hastens to the desk, assuring himself that he does not know any nuns. As he is signing the register, he cannot help glancing back over his shoulder. The nun is gone.

Putting down his pen, he asks the clerk, “Who was that nun that just passed by?”

“I beg your pardon, monsieur. What was that you said?

“That nun — who was she anyway? The one that just went by and smiled at me.”

The clerk arches his eyebrows. “You are mistaken, monsieur. A nun, in a hotel, at this time of night! Nuns don’t go wandering around town, smiling at men!”

“I know they don’t. That’s why I would like you to explain the fact that one came up and smiled at me just now, here in this lobby.”

The clerk shrugs: “Monsieur, you are the only person that has come in or gone out in the last half hour.”

As Merton describes it, the businessman eventually joined a Trappist monastery in France, giving up life in luxury hotels for the austerity of working the fields and repairing tractors.

But there is this beautiful twist:

The reason he is there can be traced ultimately to the fact that he walked into a Paris hotel and saw a nun smiling at him, though the clerk told him no nun was there.

A few days [after the incident in the lobby], he saw a picture of the very same nun in the house of some friends. They told him that her name was St. Therese of the Child Jesus. Of course, he had heard of St. Therese. Once more, he became interested in the religion he had neglected for so many years. And before long, his beard had grown and his head was shaved and he was lying underneath a tractor in a brown robe with axle grease all over his face… 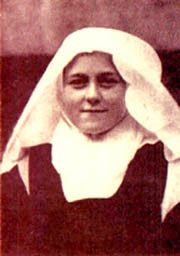 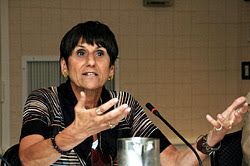 The "long, painful journey" of Rosa DeLauro
archives most recent
More from Beliefnet and our partners
previous posts