Rudy Giuliani opened up Friday about religion, the Bible, adultery and casting the first stone.

According to one wire report: 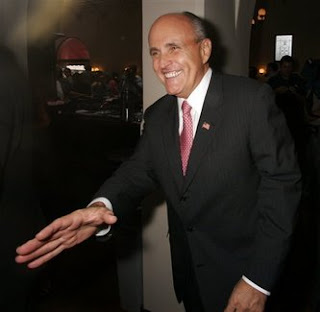 Republican presidential hopeful Rudy Giuliani compared the scrutiny of his personal life marked by three marriages to the biblical story of how Jesus dealt with an adulterous woman.

In an interview posted online Friday, Giuliani was questioned about his family and told the Christian Broadcasting Network, “I think there are some people that are very judgmental.”

Giuliani has a daughter who indicated support for Democrat Barack Obama and a son who said he didn’t speak to his father for some time. Giuliani’s messy divorce from their mother, Donna Hanover, was waged publicly while Giuliani was mayor of New York.

“I’m guided very, very often about, ‘Don’t judge others, lest you be judged,'” Giuliani told CBN interviewer David Brody. “I’m guided a lot by the story of the woman that was going to be stoned, and Jesus put the stones down and said, ‘He that hasn’t sinned, cast the first stone,’ and everybody disappeared.

In the New Testament story, related in the Gospel of John, Jesus does not actually hold stones. The Pharisees bring Jesus a woman charged with adultery, reminding him the punishment for adultery is stoning. They are testing Jesus in an effort to charge him with breaking the law.

The Gospel reads: “But when they continued asking him, he straightened up and said to them, ‘Let the one among you who is without sin be the first to throw a stone at her.’

“… And in response, they went away one by one, beginning with the elders.”

Giuliani has insisted his family relationships are private. In 1968, he married his cousin, Regina Peruggi. They divorced 14 years later, and Giuliani obtained an annulment from the Catholic Church on the grounds that as second cousins, they should have received a dispensation to marry.

Giuliani married Hanover in 1984 and they divorced in 2002. He has been married to Judith Nathan since 2003.

Likewise, he says his faith is private, although he evokes his Catholic upbringing on the campaign trail.

He told CBN he believes in God and prays to Jesus for guidance and help.

“I have very, very strong views on religion that come about from having wanted to be a priest when I was younger, having studied theology for four years in college,” he said. “It’s an area I know really, really well academically.

There’s more at the link, so take a look.