Netherlands Dominicans in dutch with their superiors 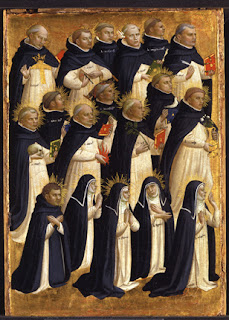 Well, I’m sure some people in the Netherlands thought it sounded like a good idea at the time.

But, not surprisingly, the Dominicans who run their order disagreed and decided — as the Church teaches — that only validly ordained priests can celebrate mass:

The leaders of the Catholic Dominican order on Tuesday censured Dutch members who said unordained ministers, including gays and women, should be able celebrate the Eucharist if priests were not available.

A booklet sent to parishes in the Netherlands earlier this month sent shock waves through the Church by making a radical proposal to deal with the shortage of Roman Catholic priests.

It said unordained ministers chosen by their priestless congregations should be allowed to celebrate the Eucharist, the centrepiece of the mass in which Catholics believe bread and wine become the body and blood of Christ.

“Whether they are women or men, homo or hetero, married or single, makes no difference. What is important is an infectious attitude of faith,” the booklet said. The main point was to keep local faith communities together, with or without a priest.

Underscoring its concern, the Vatican distributed a statement by the Rome headquarters of the Dominicans saying the solution to the shortage of priests proposed by the Dutch Dominicans was not acceptable.

“While we share their concern about the availability of the Eucharist and priestly ministry, we believe this concern must be responded to in careful theological and pastoral reflection…,” it said.

Yes. That phrasing is, if nothing else, remarkably diplomatic.

read next post
My favorite Pope John Paul moment. Ever.
archives most recent
More from Beliefnet and our partners
previous posts