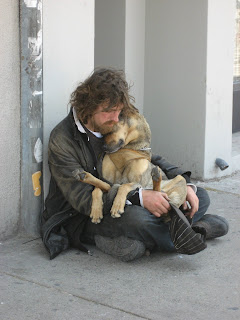 One afternoon a few years ago, my wife went to confession down at St. Francis of Assisi, on 32nd St., in Manhattan. It’s one of the few places in the city that has confession all day, every day – in part, because they have enough friars to handle it. They also can be very creative, and know how to teach a valuable lesson, as my wife found out.

When she completed her confession, the priest didn’t tell her to say five Hail Marys or 10 Our Fathers.

Instead, he asked her to go buy a meal for someone who was homeless.

So, my wife left the church and walked a couple blocks, to the Manhattan Mall, where she went to their food court, and put together a meal in a Styrofoam container. Then she went out to the street, to find someone to give it to.

The first lesson of today: you can never find a homeless person when you need one.

She walked all over Greeley Square, and around Herald Square, for blocks, looking for someone, anyone, to give it to.

Finally, she found one lone ragged man crouched on a street corner. She took a deep breath and went up to him. She held out the container and said, “Hi…I bought you dinner.”

He looked at the container, then looked at her, and said:

It seems my wife had found the one homeless man in New York City who is kosher.

She told him, no. It was lamb.

His face lit up. “Oh,” he said, “that’s great. I like lamb. Thank you!” and he took the meal, and my wife said goodbye and went on her way.

I think that single gesture was much more than an act of penance. It was a gift. And not just to the homeless man. But also to my wife.

She was required to do what the rich man in today’s gospel wouldn’t do: she had to seek out a man everyone else ignores.

And she had to look into the eyes of a stranger in need.

Mother Teresa used to say Jesus came in the “distressing disguise” of the poor. In that sense, in that moment of penance, that moment of uncertainty and humility and grace, my wife shared a moment with Christ.

Consider how often we see Christ that way in New York.

I admit it: Jesus is someone I pass by on a lot of mornings. Sometimes I step over Him on my way to work, or I look the other way when Christ rattles a cardboard cup and asks me for money.

I think a lot of us do. But as a result, we end up acting just like the rich man in Luke’s gospel.

And we so easily forget: “Whatever you do to the least of these, you do to me.”

One commentator says that the real sin of the rich man in the gospel is the sin of not noticing. While he’s content to let the poor man have his crumbs, he doesn’t pay attention to him, or lift a finger to help him.

In other words, it’s not what he DOES that sends the rich man to hell. It’s what he does NOT do.

Interestingly, the rich man is so aware of this figure who lives outside his door, he even knows his name, and he mentions it: Lazarus.

Lazarus. In all the parables, in all the gospels, this is the only character who is given a name. We don’t know the identity of the prodigal son, or the good Samaritan, or any of the other people Jesus mentions in his stories. But we do know the name of this one poor, sick man. Lazarus.

The name comes from the Hebrew Eleazar and means “God is my help.”

And so often, for those like Lazarus, their only help…is God.

Why is that? We can all come up with reasons. When the beggar man hobbles by on the subway and asks for money, we tell ourselves: “How do I know he’s really poor? Maybe he’s just going to use it for drugs. Maybe he’s a con artist.”

Maybe. And, ultimately, as the MTA keeps reminding us, we need to support programs that help the poor, rather than just give handouts.

But sometimes you just can’t know. What about all the others? The ones who just sit and beg. The ones like Lazarus. The ones for whom “God is my help.”

I wondered about that when I was going over this gospel and ended up asking myself: well, if “God is my help,” and God is THEIR help…what would God do?

It’s so simple. And so overwhelming. I can sum it up in just two words.

God holds nothing back. He gives to each of us without asking. He offers His grace to us freely.

God doesn’t wonder, cynically, if we are dishonest or ungrateful or conning Him. He already knows. And for better or worse, He loves us anyway. And, this is challenging part: we are called to love the same way. No questions asked. Unconditionally.

Because God gives. And in an unparalleled act of generosity, He even went so far as to give us His only son. And the world has never been the same.

Earlier this month, Archbishop Charles Chaput, of Denver, gave a speech to a men’s group.

He said: “Before Christianity came on the scene, no religion had ever taught that God could be found in our neighbor. The world largely ignored the poor, the hungry, the stranger, and the imprisoned. And it still does. And yet Jesus said that we find God in our love for these least brethren of ours. Christian love is not weak or anesthetic. It’s an act of will. It takes guts. It’s a deliberate submission of our selfishness to the needs of others.”

So: consider today the parable of the rich man who had a neighbor named Lazarus. Consider how he treated his neighbor – what he could have done, but didn’t.

And consider our calling as Christians. Each of us is neighbor to one another. And each of us is summoned to love. To love like God, and to give like God. Without questions, or conditions or guarantees.

It sounds impossible. But it begins, I think, with doing what my wife did that day on 32nd Street. It begins with looking. With noticing. And with seeing those we would prefer not to see.

There are starving people like that everywhere, even perhaps here, right now, in this church.

The message of today’s gospel is the lesson of my wife’s penance: Seek them out. Notice the need. We have to keep open our eyes, and our hearts. It isn’t easy.

Because God looks. And sees. 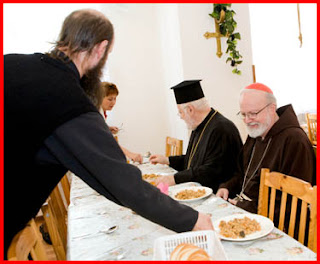 From Russia, with blog
archives most recent
More from Beliefnet and our partners
previous posts