A married Episcopalian priest converts — and so does his flock 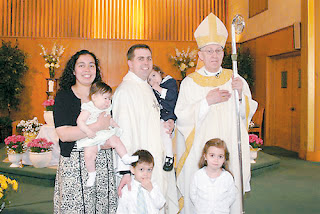 Here’s something exciting: an Episcopalian priest converts to Catholicism — and brings a big part of his flock with him.

Oh, and he’s married with kids, too:

For the Rev. Eric L. Bergman, the duties of a Roman Catholic priest mean including his wife and four children whenever possible.

While Roman Catholic priests may not marry, Bergman was ordained under a Pastoral Provision approved by Pope John Paul II in 1980. Bergman was an Episcopalian priest, a faith that permits its priests to marry, when he sought priesthood in the Roman Catholic Church.

On April 21, 2007, Bergman was ordained a priest of the Roman Catholic Diocese of Scranton by John Dougherty, auxiliary bishop. Bergman said his family continues to be an important part of his life as a priest.

“We do a lot of things together,” Bergman said during a telephone interview from Scranton, Pa. “I’m at my office and my family is with me. Priesthood offers some flexibility. I can work 14 hours one day and be off the next. For someone who likes a regimented schedule, this would not be the job.”

Born in Tennessee, Bergman grew up in the Episcopal faith and was baptized in 1971. He earned an undergraduate degree from James Madison University in Virginia and a master’s of divinity from Yale.

In 1997, he was ordained an Episcopal priest.

His faith journey brought him to Roman Catholicism.

“I was at a retreat in 2004 when I realized that, based on my beliefs, I would become Catholic whether or not I could become a priest,” he said. “I had a congregation with many who had the same beliefs I had.”

Bergman, 36, and half of his parishioners made the conversion.

“I remained the pastor of these people who converted with me,” he said. “This has happened five other times in the United States.”

Bergman now serves a congregation of 70 as chaplain of the St. Thomas More Society, a community of Catholic converts.

“We were all confirmed together on Oct. 31, 2005,” he said. “We are a society of the diocese. Other people are looking to us as an example. I am in correspondence with 20 men who want to do the same thing I did. Since the Pastoral Provision of John Paul II in 1980, 100 men have been ordained. We have seen a real increase.

“Anglicanism is a bridge between Protestantism and Catholicism,” he said. “A lot of Anglicans think of themselves as Catholics not in communion with Rome. Liturgy is similar to a Catholic mass. It’s a natural jump for a lot of people.”

“I don’t want to malign or disparage Anglicanism,” he said. “It is a lot of people’s faith. I grew up in that church. It is where I obtained spirituality and an appreciation for scripture and music.”

When he and many of his parishioners felt the pull to the Roman Catholic church, he said they did not have to leave behind many of the traditions with which they were familiar.

While this sort of conversion-and-ordination is becoming more common, what strikes me as unusual about Father Eric’s case is that he’s quite young — and that he brought a significant part of his flock with him.

Welcome, one and all. It’s great to have you. Make yourselves right at home.

Photo: The Rev. Eric L. Bergman was recently ordained into the priesthood by John M. Dougherty, auxiliary bishop of Scranton, Pa. Bergman is shown here with his wife, Kristina, and their children, Clara, 5, Eric, 4, Julia, 2, and Joan who is 9 months old. Photo from the Charleston Daily Mail.