Kaddish and psalms for Cardinal Lustiger 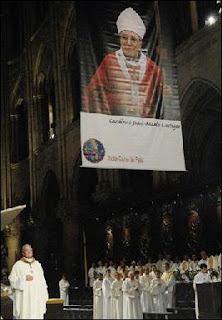 The funeral for Cardinal Lustiger tomorrow will reportedly be rife with symbolism and rich with meaning — as befits a man who survived the Holocaust and went on to become a leading figure in the Catholic Church:

Cardinal Jean-Marie Lustiger, who sought to bring Jews and Catholics together in life, is continuing the mission in death.

In a funeral infused with symbolism, Jews will stand Friday in front of the sculpted saints of Notre Dame cathedral and recite one of Judaism’s most sacred prayers — moments before an archbishop reads psalms for the Jew who converted to Catholicism, became a towering figure in the church and was even touted as a possible candidate for the papacy.

Lustiger’s own faith remained complex up until his death Sunday at age 80 in a Paris hospice. He never rejected his Jewish identity, and worked to heal wounds between France’s Jews and Catholics.

The longtime archbishop of Paris, whose mother died at Auschwitz and who was a confidant of late Pope John Paul II, asked that his funeral include both faiths.

“This was his wish, to share the remembrance this way,” Arno Lustiger, a cousin who is a German historian and Auschwitz survivor, told The Associated Press.

Arno Lustiger, 83, will lead the reading of the kaddish mourning prayer, in Hebrew, in front of Notre Dame on Friday morning.

A grandnephew, Gila, will read a psalm and message to the cardinal from his family, in French. Another relative, Jonas-Moses Lustiger, is bringing earth from Christian holy sites in and around Jerusalem to be sprinkled on the coffin.

Shortly after the kaddish, Lustiger’s successor as archbishop of Paris, Andre Vingt-Trois, will lead a funeral Mass inside the 12th century cathedral, one of the greatest symbols of French Catholicism.

Among those in attendance will be France’s leading Jewish and Catholic figures, as well as President Nicolas Sarkozy. Sarkozy will interrupt his U.S. vacation to attend Lustiger’s funeral, before jetting back to Maine for lunch the next day with U.S. President George W. Bush.

Many of those attending the Mass are expected to attend the kaddish reading as well, the Paris diocese said.

The day before the funeral, hundreds of people paid their respects at Notre Dame, where Lustiger’s wooden casket was laid out on the floor under a large hanging portrait of the cardinal. Many mourners knelt to pray.

Rosita Ferrer, a 59-year-old Parisian, said she wasn’t surprised by the cardinal’s wish to honor his Jewish heritage.

“It’s a beautiful symbol,” Ferrer said. “He did so much for the reconciliation of religions. … He is leaving us a beautiful gift for years to come.”

I can’t help but note that he will buried on the Feast of St. Lawrence, deacon and martyr, who himself was one of the great servants of the Church.

Tony Snow: "We can let love change everything"
archives most recent
More from Beliefnet and our partners
previous posts