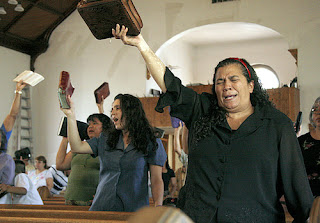 It’s a phenomenon a lot of religious observers have noticed: more and more Latinos are converting from Catholicism to Evangelical Protestantism. And one Pennsylvania community is seeing an influx of Hispanics who are former Catholics:

As Pentecostal churches offering Spanish services in center city continue to proliferate, a study released by the Pew Hispanic Center in April found that while the majority of Latinos in America still identify with Catholicism, nearly one in five has converted to another religion or become secular. Most of these converts, it found, are flocking to Evangelical churches.

Unlike Catholicism, Pentecostalism, the largest and fastest-growing evangelical church, is a denomination that thrives on Latino converts. The study showed that over half of Latino Evangelicals are converts, while only 10 percent of white, non-Hispanics are.

This reflects the growth of Pentecostalism worldwide and a steady decline in the global popularity of the Catholic Church, said Luis Lugo, director of the Pew Forum on Religion on Public Life.

One quarter of all the world’s Christians are now Pentecostals, said Lugo. ”That amounts to a transformation of Christianity.”

As America is more and more Latinized by immigration, he said, Pentecostalism will become increasingly more common in the United States.

One reason for the dramatic growth of Pentecostalism is its ability to accommodate its members in various cultural and economic environments, said Anna Adams, professor of Latin American history at Muhlenberg College who’s published several articles on the subject.

“Pentecostalism has an amazing capacity to shift with the needs of its congregants,” said Adams.

In Allentown, she said, the Pentecostal churches are filling the spiritual and emotional needs of Hispanic immigrants who are looking for a place to be accepted.

In Allentown, more than 30 storefront Pentecostal churches dot the urban landscape of Center City. Like Iglesia de Dios, many storefront churches are in small buildings with small congregations. They fill the empty retail spaces left by downtown’s commercial collapse, converting old sandwich shops and shoe stores into houses of worship.

This is transforming urban America — and it remains to be seen if it will also transform the Catholic Church. Once, Hispanics were among the staunchest and most devout Catholics. How can we keep from losing them to a religious culture that seems so welcoming, accomodating and spiritual vibrant? The article explains the attraction:

Antonia Cordero, 34, has been a member of Iglesia Betania, Allentown’s oldest Pentecostal church, for four years. She came to Allentown a decade ago from Puerto Rico, a Catholic in name only.

“I never found anything in Catholic church that interested me,” she said, “except the boys.”

Cordero followed a friend to Iglesia Betania, which began as a storefront church with five people in the 1960s and now accommodates 150 congregants in its home in a former United Church of Christ building at Ninth and Liberty. She converted on her first visit.

“I found Christ through these people,” said Cordero, “With the Catholic church, you would go in and come out the same. Here, I’ve changed.”

According to the Pew study, of all Latino Evangelical converts from Catholicism, 90 percent of them converted out of a desire for a more direct relationship with God.

Pentecostals often engage in an excited worship style that involves dancing and speaking in tongues. For many congregants, these actions are animated by the visitation or inspiration of the Holy Spirit, and this frenzied, direct encounter with God drives the conversion process.

Mercado said the Church’s stance on divorce and other controversial issues may drive some Latino Catholics away. However, the Pew study found that only 13 percent of converts cited the Churh’s position on contentious topics a reason for leaving Catholicism.

There’s a lot in the article to absorb and wonder about and pray over. For Pentecostals, and for Catholics.

Photo: from the Allentown Morning Call 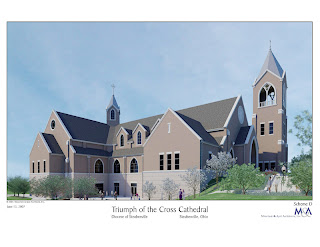 Triumph of the Cross, and a triumph of good taste
archives most recent
More from Beliefnet and our partners
previous posts