“You have given them bread from heaven…” 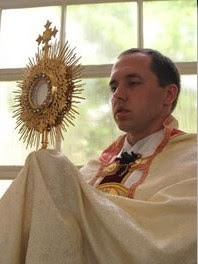 One of the many devotions that the deacon may lead is Benediction of the Most Blessed Sacrament or, as it’s simply known, “Benediction.” As the Catholic Encyclopedia describes it:

It is ordinarily an afternoon or evening devotion and consists in the singing of certain hymns, or litanies, or canticles, before the Blessed Sacrament, which is exposed upon the altar in a monstrance and is surrounded with lights. At the end, the priest, his shoulders enveloped in a humeral veil, takes the monstrance into his hands and with it makes the sign of the cross (hence the name Benediction) in silence over the kneeling congregation.

At my parish, we have Exposition and Adoration every Thursday afternoon, concluding with Benediction at 7:30. Last week, I made my maiden voyage with this particular devotion; I survived all the standing, kneeling and walking with the extra ton or so of vestments, and managed to avoid tripping over the cope. In other words, I – ahem – coped. I’ll be doing it again tomorrow night.

One of the more exotic and misunderstood vestments is the humeral veil — in the picture to the left, the swath of fabric with which the priest is holding the monstrance. Most lay people, and even most priests, believe the minister uses it because he is unworthy to touch the monstrance or get that close to the Blessed Sacrament. Considering that the priest or deacon places the host in the monstrance, and later reposes it in the tabernacle, that’s not quite accurate. And neither is the notion that it’s just an additional sign of reverence.

So why does he use it?

It is to separate himself from the act of blessing.

The priest or deacon blesses the faithful with the Blessed Sacrament — but by wrapping his hands in the humeral veil, he signifies his own removal from the action.

He doesn’t bless the people. Christ does.

Lord Jesus Christ, you gave us the Eucharist as the memorial of your suffering and death.
May our worship of this sacrament of your body and blood
help us to experience the salvation you won for us
and the peace of the kingdom
where you live with the Father and the Holy Spirit, one God, for ever and ever.

Homily for June 24, 2007: Nativity of John the Baptist
archives most recent
More from Beliefnet and our partners
previous posts