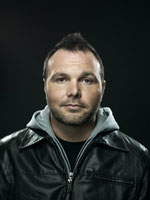 I missed this news because I don’t pay too much attention to the theology-blogging world since closing my O Me of Little Faith blog, but it seems infamous Seattle pastor/movement leader Mark Driscoll has launched a new website called PastorMark.tv. It’s supposed to be sort of a clearinghouse for all his online content, from sermons to videos to blog posts. Which is a good idea. No problems there.

According to this announcement from Mars Hill, Driscoll’s church, it’s also a place for his wife Grace Driscoll to write about “being a godly wife, mother, and friend.” OK. That’s cool, too.

It’s also a place for Driscoll’s daughter, Ashley, to post book reviews and write about “how to balance the pressures of high school and staying faithful to Jesus.” That’s–

This bothers me. Not the idea of a high schooler having a blog. I think blogs are a great outlet for young writers, for expressing opinions, for exploring ideas. I’ve talked to our middle-school daughter about blogging. I think she would love having a small, private blog for her friends and family to read. But there’s a difference between my daughter and Mark Driscoll’s daughter.

1) Driscoll is very well known. In some circles he is revered. In others he is hated. As a theologian and preacher, he is a lightning rod. He can’t say anything without stirring up a storm somewhere, and those storms always find their way back to him.

2) The theological blog world loves a good fight. There are trolls under every bridge, on both sides. Driscoll gets attacked by them constantly, but he doesn’t care. He’s fearless and hard-headed, and that’s part of why people like him so much.

3) Driscoll can shield his family from the punches he takes as a blogger and on Facebook and Twitter. But can he still do that after opening up space for his daughter to blog on his official site? I don’t know.

As a dad, that makes me nervous.

As an author, I have a modest public persona, in small circles. It’s not huge — I’m not even in the same stratosphere as Driscoll — but there is no way I’d let my daughter blog in an official capacity as The Daughter of Jason Boyett. Not now, not when she’s a freshman in high school, not when she’s an adult. She can start up her own blog if she wants. She can do her own thing and build her own platform. But have a teenager write as an extension of my personal brand? No way would I burden her with my own work.

Personally, I’m glad I wasn’t blogging when I was 14. I’m a little embarrassed at stuff I wrote about when I was 24, but at least that was pre-Google. But that’s not the issue. What IS the issue is how hard it is to be the child of a pastor. Even if your dad isn’t the kind of pastor who’s featured in the New York Times, the families of pastors are under constant scrutiny, constant pressure, constant judgment. We all know “preacher’s kids” who have imploded. A well-adjusted preacher’s kid is almost a surprise these days (even though I know quite a few). What must it be like when your dad is as famous a pastor as Driscoll? And what will it be like when your famous dad invites you up on his platform?

Ashley Driscoll isn’t my daughter, but it makes me worry for her. I don’t even use my daughter’s name in public online forums like this one, because I don’t want her (or her friends) to be able to Google it and find a bunch of stories I’ve told about her. Same goes for my son.

Alisa Harris, whom I interviewed last week with her own father, has the same concerns. In this provocative blog post, she exclaims “Driscoll…what are you thinking?” Her thoughts:

If Driscoll is the one elevating his children to celebrity status, he’s inviting people to invade their privacy. When you use your 14-year-old daughter as a model for how young women should follow Jesus, you lose the ability to plead for grace when she, well, doesn’t follow Jesus quite like everyone thinks she should. If your daughter is blogging about modesty, all her clothing choices are up for debate. If she’s blogging about dating, her offline choices in boys are open for criticism. This is absolutely not right for people to do—I undoubtedly would have needed even more years of therapy if my high school clothing had been open to public criticism—but they will do it. When you turn your children into celebrities you have forfeited your ability to protect them when people treat them…like celebrities.

Bingo. Being a teenager is hard enough. Being a teenager with an audience of thousands, with your every thought recorded for eternity and compared/contrasted with that of your controversial father — well, that seems like hell.

Not a good idea. I hope I’m wrong.