When It’s Time to Tell Your Dog Goodbye

Yesterday was a hard day. After 13 years, we had to say goodbye to Joe, our Yorkie. This is a photo our son took of him about a year ago: 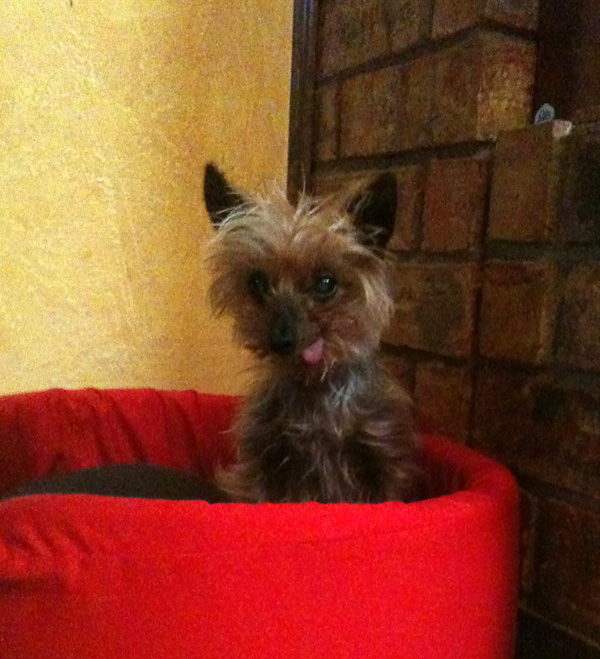 Yes, he was goofy-looking. Joe had bad teeth, and a couple years back they all had to be pulled (except for one molar way in the back). The result was that his mouth rarely closed all the way, and his tongue lolled out quite frequently. He was really small — even for a Yorkie — very skinny, and always a little weird. He trembled almost constantly, was skittish from the time we got him when he was 9 months old, and barked furiously whenever one of us took out the trash. But he loved us and loved to cuddle. There’s a lot to be said for a warm, fuzzy 4-lb. dog who’ll cuddle with little kids.

Joe has been mostly deaf and blind for at least the last two years. The hearing loss was kind of funny because Joe would whimper and moan as he dug himself into his bed every night. We’re pretty sure he couldn’t hear himself and didn’t know he was making such ridiculous noises. His eyes were completely clouded up, but he could get around by memory and some remaining peripheral vision. The gape-mouthed drooling had increased dramatically. His face hollowed out, making his jaw nearly disappear and his already big eyes bulge out. He looked really, really weird. And other than the occasional walk and a few forced play times from Daisy, our Yorkie puppy (who quickly surpassed Joe in size and weight), Joe didn’t do much. He ate. He slept. He was a constant, comfortable, funny-looking presence in our lives.

Things started going downhill this weekend. He barely slept at all Sunday night (nor did we). He whimpered all night long, finally falling into a fitful, shivery sleep around 4 am. He stopped eating. He stopped sleeping, instead preferring to pace around our house all day long, never settling in. His back was hunched and his tail tucked. His funny bed-digging whimpering stopped being funny. It sounded uncomfortable and manic. Something happened to his memory, too. He was running into walls and furniture. He kept falling down as he tried to walk, slipping on the wood floors, stumbling on the carpet. Joe wasn’t himself.

After another sleepless night on Monday, we took him to the vet on Tuesday. He had an infection. It made him dehydrated and constipated. They gave him some fluids via a tiny IV in his papery skin, helped him get cleaned out, gave us some medicine and sent him home. The vet thought we might try some homeopathic stuff to calm his nerves. He mentioned dementia was starting to set in.

We had another sleepless night on Tuesday. He couldn’t get still. He wouldn’t eat or drink. He peed on the floor. He was messed up, suffering. So were we.

Dogs don’t live as long as we do, and every dog owner knows they’re going to get to this point. The average life expectancy of a dog is 12.8 years. Only 40% of small-breed dogs live past 10 years. Joe was old. Clearly he was miserable this week, and the question we had to ask ourselves was: How long would it take to get past this infection? And even if he got past this infection, would he really get “better”? Maybe the internal discomfort would improve. Maybe he’d be able to sit still. But he’d still be blind, and deaf, and spiraling into dementia. Was the stumbling due to the dehydration or his deteriorating brain? Had he suddenly lost his peripheral vision? Would he ever enjoy eating again? Sleeping? Would he enjoy anything again?

That was the question: Moving forward, could we anticipate a good, doggy life for Joe? We wanted to, but we just couldn’t see it. So do we let him suffer for the next week while we try to make him better with medicine and homeopathy and constant discomfort? Or do we give him a merciful exit, because the idea of what exactly “better” would look like was so uncertain?

I found an old 2003 piece at Slate by Jon Katz about this agonizing decision, and read this paragraph several times:

There’s no Idiot’s Guide for this question, no handbook. The many points of view are strongly held. One vet I know says a dog should be euthanized “when it can no longer live the life of a dog—and only the owner knows when that really is.” A breeder says she puts her dogs down when “their suffering exceeds their ability to take pleasure in life.” A trainer I respect believes her dog should live as long as it can eat.

We decided to give Joe an exit. We called the vet. I took him in at 11 am, yesterday morning. He whimpered the whole way there. I cried openly the whole way home.

We told the kids when they got home from school. We cried all over again.

We tried to help them understand that our decision was a terrible one to have to make, but it was the right thing for Joe. He couldn’t tell us exactly what he was feeling, but we could see clearly that he was hurting. That he was not right. And because Joe couldn’t tell us what to do or make his own decisions, we needed to act on his behalf.

To love dogs is to know death and to accept that there’s never a time we are more morally obliged to speak for them than when they face the end of their lives.

Someday, maybe, we’ll walk our kids through the decision-making process, because there’s a big, valuable lesson in there about compassion and empathy. But today isn’t the time for object lessons. Today is a time to be sad, because we loved Joe and we miss him.