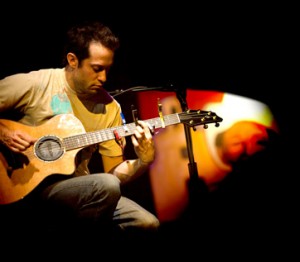 Today’s dad is my friend Trace Bundy, an acoustic guitar ninja who lives near Boulder, Colorado. He once joined my kids and me in an epic Nerf-gun battle inside the Boyett fortress.

My name is Trace Bundy, I’m 34 years old, and I’m a full-time touring musician. I play a unique style of acoustic fingerstyle guitar. I live in an old mining town called Louisville, CO, although I’m mostly on planes and rental cars and at music venues along with my beautiful wife Becca and our 8-month old son Sawyer.

Besides the fact that I cut his umbilical cord without passing out, every night I read a little book to Sawyer and tuck him in. But I guess that’s pretty average. Technically, I take him to work with me everyday too. By his first birthday, he will have seen more of the world than I did by the time I was 25. Sawyer has been to 11 states so far and just completed his first European adventure, along with an Asia tour in the fall. I think that’s pretty cool.

Sawyer is a bit young for eye rolls, but I do know that he thinks I’m pretty silly when I try to dress him in my clothing. I couldn’t help it…

Two things. One I will call “How Parenting Affects my Life as a Musician.” While we’ve been able to travel with Sawyer so far, there will come a point when this will become very difficult. My wife and I have been traveling together for over five years, and we’d really hate to transition into being a long-distance family. Do we homeschool? Do Becca & Sawyer stay home? These are all difficult questions for us. The second thing I will call “The Glory Formerly Known as Sleep.” I miss it.

What is your absolute favorite thing to do with your kid?

When Sawyer first wakes up in the morning, I go into his room and say “Good morning, Little Man!” The smiles and giggles that ensue are some of my favorite things in the world. Sawyer also seems to love adventure, so I like to take him on crazy fast stroller rides — also known as “extreme strolling.”

Someone once said “Your children join YOUR life — you invite them into your world, instead of changing your life to fit theirs.” I think this is incredible advice. Sawyer was made to be a part of our family, which means he was made to be a traveler. We might get weird looks from people when they see Sawyer awake late at night at a music venue, but we wouldn’t have it any other way. And, so far as I can tell, Sawyer seems all the better for it.

Sing silly songs. Laugh a lot. Being a dad is a great excuse to get to be a kid again.

Note from Jason: Go watch some of Trace’s videos using that YouTube link above, and be amazed. 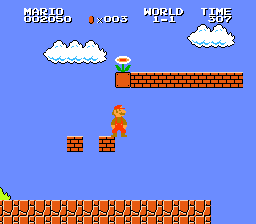 What Is YOUR 12-Year-Old Game?
archives most recent
More from Beliefnet and our partners
previous posts