Serving Your Kid and the Cutting of Waffles 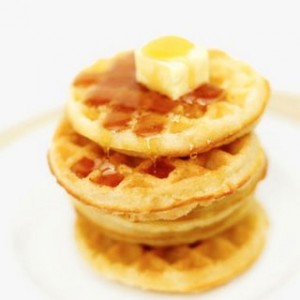 When I was a kid, one of the things I loved most about going to my maternal grandparents’ house was that 1) Deenie (my grandmother) would always fix us waffles for breakfast, and 2) she would cut them up before serving them to us.

The waffles were great, but the detail of her pre-cutting them for us has been one of those memories that remains fixed in my mind. I think it’s because she was still cutting our waffles long after Mom stopped cutting up our waffles at home. And that was wonderful, because at home we had to do it ourselves.

Yesterday I linked the St. Petersburg Times piece from Josh Gillin about finding a balance between your kids’ interests and your own. Gillin used a phrase to describe his own dad that I keep coming back to: his dad didn’t ignore him, but neither was he “a slave to his children.”

Servanthood has long been a discipline I’ve worked to make part of my spiritual life. In fact, I talk about it at length in O Me of Little Faith. It plays a role in our parenting, too. Both my wife and I are temperamentally suited to “serve” our kids. To take care of them. To do things for them, sacrificially, out of love. But we’ve had to make ourselves recalibrate that tendency over the last few years, because there comes a point where each kid needs to gain an age-appropriate independence. We’re not doing them any favors by serving them day in and day out. Our well-meaning efforts to do stuff for them gets in the way of them learning to do those things themselves.

At some point, you’ve got to stop cutting the waffle into bite-sized pieces. A kid needs to learn to cut his own waffle.

(Unless you’re a grandparent. In that case, you are free to cut your grandson’s waffles for as long as you like. Right, Deenie?)