People can see the face of Jesus in an unexpected place: a Google earth map. Many believers think the appearance is a sign of the presence of God!

If the image was viewed normally, the image would simply look like a standard image of Spain. However, it was discovered that you could use Google earth’s organic tools to tweak the image’s opacity later. When this is done, the face looks a lot like Jesus’ face from the Passion of the Christ movie.

This is not the first time a visual of Jesus appeared in an unexpected place on Google. A man searched through Google Maps Street View and came across a strange pair of figures in the sky. The figures resembled Jesus and Mary.

He took a video to share with others. When Google updated the map a while later, the two figures had disappeared. Those who saw the image the man shared thought this was also a sign from God.

The image of Jesus’ face on the Google earth map is quite incredible. The person who discovered the image says no aspect ratio was adjusted.

“I was amazed it lined up the way it did. The details in person are amazing, from the one eye shut, to the blood going down the bridge of his nose, to the crown of thorns lining up, to the white spots on his beard under his lip, to the obvious eye, even blood stains on his cheeks are there. I repeat, the aspect ratio was not changed to make this happen. Jesus bless you,” he said.

See it for yourself in the video below. 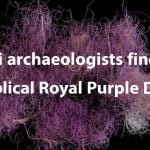