Christian evangelist and YouTube star Paul Begley believes the world is coming to an end and says that the catastrophic events of 2020 are clear signs.

Begley has cited the coronavirus pandemic and several eclipses as indicators of the end times on his YouTube channel with nearly 340,000 followers. Recently, he’s discussed how the Holy Land of Isreal might also be at play.

Violent clashes on the border is a premonition of things to come, he says. Earlier this week, the Isreal Defence Forces announced it had stopped an infiltration attempt by a Lebanese militant group after months of tension.

“The Bible told us that Israel was going to come under attack, without question,” he said.

Begley then quoted Zechariah Chapter 11, which contains references to fire devouring Lebanon. It says: “‘For I will no longer have pity on the people of the land,’ declares the Lord. ‘I will give everyone into the hands of their neighbours and their king. They will devastate the land, and I will not rescue anyone from their hands.'”

Begley claims the Bible predicted Lebanon being taken over by Hezbollah, the Lebanese militant group, and causing their own downfall in the Israeli border conflict.

“They have set themselves up for the slaughter, for the attack upon them, because they opened a door they shouldn’t have opened.”

He goes on to describe Israel as “the holiest place on Earth” and the location of a spiritual battle between good and evil that he believes is heating up and could result in apocalyptic scenes.

“This isn’t really about us, this is about God and Lucifer.” 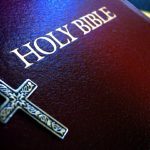 Report: 245 Million People Could Lose Access to Bibles Due to COVID-19
archives most recent
More from Beliefnet and our partners
previous posts

Franklin Graham: Republicans and Democrats Cannot Fix the Nation, Only God Can

Evangelist Franklin Graham believes the issues of our nation are ones that only our Lord can solve, but our time is running short. Graham is preparing to lead the Prayer March 2020 in Washington, D.C. this upcoming week, and said in an interview with The Christian Post that he is motivated to call the country […]

On the September 15th show of “The Charlie Kirk Show” podcast, right-wing commentator Charlie Kirk warned his listeners about what America could look like if Donald Trump doesn’t win the presidency again. He also called out those who are apathetic about the election, citing different reasons why they should care. “For those of you that […]

Self-identified white Christians are becoming less and less concerned about racial injustices in America, according to a new report set out by the Barna Group. The findings, made available to the public this week, reported that 33 percent of white Christians believed the United States “definitely” had a race problem. This was down from 40 […]

President Trump’s core support base is evangelical Christians, but according to his former lawyer Michael Cohen, Trump has disrespected them on more than one occasion. Evangelicals, who make up one in four Americans, were credited with helping Trump win the White House with 80 percent voting for Trump in 2016. In Cohen’s new book, “Disloyal: […]