A church that had been battling city officials over Covid-19 restrictions was destroyed in a fire that investigators believe was intentionally set.

First Pentecostal Church had sued the city of Holly Springs, Mississippi, which is about an hour southeast of Memphis, arguing that its stay-at-home order had violated the church’s right to free speech and interfered with its members’ ability to worship. After growing frustration with the city’s executive orders, the first of which was issued on March 23, the church’s pastor, Jerry Waldrop, confronted city officials at a demonstration at a local Walmart. They then filed a lawsuit in April

After putting out the fire on Wednesday morning, investigators found graffiti in the church parking lot that reads, “Bet you stay home now you hypokrits,” NBC affiliate WMC of Memphis reported. A photograph of the graffiti also appears to show an atomic symbol with an “A” in the center, which is sometimes used as a logo for atheist groups.

Mississippi Gov. Tate Reeves said he’s “heartbroken and furious”. The church was “burned to the ground” and had been trying to open services, Reeves tweeted Thursday. “What is this pandemic doing to us?” he added. “We need prayer for this country.”

I am heartbroken and furious. In Mississippi, a church was just burned to the ground. They had been trying to open services. There was graffiti on the lot which read “Bet you stay home now you hypocrites.”

What is this pandemic doing to us? We need prayer for this country. pic.twitter.com/TdGHqs9evv

“This is not who we are,” the governor additionally said at a daily news conference on the coronavirus epidemic and the state’s response.

“Obviously, we have to ensure that this investigation is done and that it is completed,” Reeves said. “But if this is in fact what it looks like, I want you to know that we’re going to do everything in our power to find whomever burned this church down.”

Major McMillen said that no suspects had been identified, but that investigators, including from the Bureau of Alcohol, Tobacco, Firearms, and Explosives and potentially the F.B.I., would be going through the scene on Friday.

Stephen Crampton, senior counsel at the Thomas More Society, a pro-life law firm, said the church was a total loss. He added that the church had been allowed to meet for drive-in services a few weeks ago, though the legal team was “continuing to pursue the right to meet in person.”

“To find that that graffiti is spray painted in there — ‘I bet you stay home now, you hypocrites,’ right — seems very clearly directed at this particular lawsuit and the church’s stand for its own Constitutional rights,” he said.

Earlier this week, Reeves released guidance on resuming in-person faith gatherings, which include cleaning and disinfection, holding separate services for vulnerable populations, and creating a 6-foot buffer between household groups. 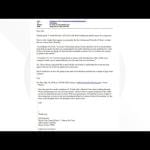