In the final chapters of the Bible, the Four Horseman of the Apocalypse will arrive to signify the end times. Are the seven Seals of the Book of Revelation unfolding today?

Some end times theorists and Christian evangelists believe they have found links between the Coronavirus and prophecies in the Book of Revelation.

In the final chapters of the Bible, the Four Horseman of the Apocalypse are referenced. Each horseman is a harbinger of the death, destruction and disorder that will take place in the last days.

Some interpret the significance of the four horsemen as events that have been ongoing since this prophecy was given, but will intensify before the rapture.

Some theologians believe that the end times is already in motion due to the level of violence, immorality, and disorder in the world today.

According to Jeremiah Jaques from the Philadelphia Church of God website, the Book of Revelation is about “things which shall be hereafter,” Express News report.

Jaques said, “In Revelation 6, John was inspired to write about the ‘seven seals’ that lead up to Second Coming of Christ.

“The first four are often called the ‘Four Horsemen of the Apocalypse,’ Jaques said. “They represent religious deception, war, famine and disease – verses 1 to 8.”

The Apostle John described the Forth Horseman as ‘death.’ There are also interpretations and translations of the Bible, the Fourth Horseman is called ‘pestilence’ or ‘plague.’

“This is a personification of disease epidemics – sickly, haunting and unyielding,” Jaques said.

“The passage says that along with the other three riders, the anaemic-looking horseman that represents disease will slay ‘the fourth part of the earth’,” he said.

“With today’s population of 7.7 billion, that figure would come to almost 2 billion,” he also added.

The full passage he was referencing was Revelation 6:5-8.

Luke 21:11 also cautions us that there will be ‘pestilences in various places and fearful events’ in the final days.

While we don’t know if the ‘pestilences’ Jesus mentions refers directly to COVID-19, is it a warning? Is it an end times sign? 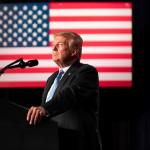