Historic Past Lives of the Famous 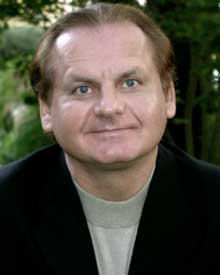 Here’s the interesting (to some, most amusing) website of a man who feels that the founding fathers and other historic figures have been reincarnated into the bodies of today’s public figures. He uses photographs and old paintings to reveal that Tommy Franks is George Washington, Oprah Winfrey is James Wilson, Dean Kamen is Benjamin Franklin, John McCain is Henry Clay, John Kerry is Andrew Jackson, and John Paul II was Benedict Spinoza.

It is good that someone is out there thinking of this.
Most interesting and authentic-seeming is his reference to a woman who wrote a book about her previous life as Holocaust victim Anne Frank. She could recall memories of the Amsterdam attic apartment where the Frank family hid, and details of Frank’s life with uncanny precision.