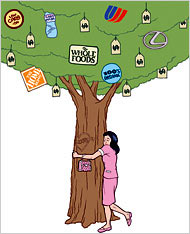 You’ve got to read this piece from yesterday’s New York Times: “Buying Into The Green Movement: Eco-friendly shopping may be fashionable, but critics argue it won’t reduce global warming.”
This had to be said, and writer Alex Williams reports the piece evenly. We’re fooling ourselves when we think that shopping green alone–buying organic sheets or using a phosphate-free detergent, for instance–is going to slow or reverse climate change. I don’t think anyone really thought it worked that way. But we really fool ourselves when we stand in line at Whole Foods–all proud and virtuous–to buy an imported bottled water, or minimally-treated bananas grown thousands of miles away. We deserve a small hand for trying, but here’s what you can really do to deepen your commitment to the planet: Cut down on your meat consumption (cows and chickens use up a lot of energy in their life times), live in a small apartment or house, get a smaller car, (never a larger hybrid, right?), unplug your chargers and appliances when not in use, don’t drink a bottled water that used fuel to be flown or trucked in from far-off places.

“A legitimate beef that people have with green consumerism is, at end of the day, the things causing climate change are more caused by politics and the economy than individual behavior,” said Michel Gelobter, a former professor of environmental policy at Rutgers who is now president of Redefining Progress, a nonprofit policy group that promotes sustainable living.
“A lot of what we need to do doesn’t have to do with what you put in your shopping basket,” he said. “It has to do with mass transit, housing density. It has to do with the war and subsidies for the coal and fossil fuel industry.”
In fact, those light-green environmentalists who chose not to lecture about sacrifice and promote the trendiness of eco-sensitive products may be on to something.
Michael Shellenberger, a partner at American Environics, a market research firm in Oakland, Calif., said that his company ran a series of focus groups in April for the environmental group Earthjustice, and was surprised by the results.
People considered their trip down the Eco Options aisles at Home Depot a beginning, not an end point.
“We didn’t find that people felt that their consumption gave them a pass, so to speak,” Mr. Shellenberger said. “They knew what they were doing wasn’t going to deal with the problems, and these little consumer things won’t add up. But they do it as a practice of mindfulness. They didn’t see it as antithetical to political action. Folks who were engaged in these green practices were actually becoming more committed to more transformative political action on global warming.”