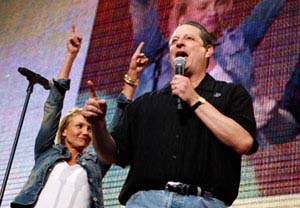 Al Gore’s barn-burning second act is an effort to raise consciousness about global warming but it is also an affirmation that there are more of us than there are of them — a demonstration that there is a better Western consciousness at work than the one that has inspired such hair-raising international enmity over the last few years. The strong contention held by Live Earth that thinking about the collective good is simply a better way to do business was at least a nice idea, and at best, a potentially empowering paradigm shift.

The concerts themselves assiduously avoided any mention of political agenda, apart from a general, collective resistance to buying into false, corporate-manufactured ideologies. If there was any glaring omission, it was that there seemed to be an outright kibosh on Republican bashing. The concerts were effortlessly positive, and successfully intent on bringing home a handful of specific messages in an eco-conscious “Seven Point Pledge” (e.g., buy fluorescent light bulbs) … all of which could be distilled into the one simple message: Every little bit really does help. You too can contribute to the sum of a unified, greater effort to pass on a healthy planet to the kids.

Did you see any of it? What did you think? Check out the performances of your favorite artists here.