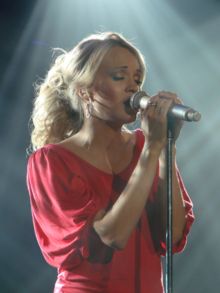 My kids, now 10 and 13, love to listen to our local top-40 hit radio station. Justin Timberlake, Fergie, and other pop music stars are suddenly characters in our lives, as vivid as any people we know in reality.
I’m trying to strike that balance between being a mom who is somewhat cool but not trying too hard to be cool. (As the great Marge Simpson once said in a Simpson’s episode: “Do the kids at school still say ‘cool’?” Bart responds, somewhat disgusted, “Yes, Mom.”)

Pop culture is teaching material. Better to just use it than avoid it altogether. And we had a real doozie of a teaching moment yesterday as we listened to Carrie Underwood’s extremely popular country-and-western ballad of revenge, “Before He Cheats.” Here are the lyrics:

Right now, he’s probably up behind her with a pool-stick, showing her how to shoot a combo…
And he don’t know…
That I dug my key into the side of his pretty little souped up four-wheel drive,
carved my name into his leather seats…
I took a Louisville slugger to both headlights,
slashed a hole in all four tires…
Maybe next time he’ll think before he cheats.
I turned the volume down and said: “Do you hear what this woman is doing? She destroying her old boyfriend’s car.”
“Yeah, but he cheated on her,” said my 10-year-old in a matter of fact tone that appalled me.
“It’s revenge. She’s sick. She could get in trouble. She’s breaking the law. Instead of moving on and finding someone else…”
“Oh, Mom,” said the13-year-old in a yawn from the car’s backseat, stretching his growing arms. (The new teen seems always sleepy, in a process of waking up to whatever’s going on around him.)
“Revenge is wrong. She’s stuck. She’s looking back instead of moving on. She needs help. Can you imagine how her next boyfriend is going to react when she tells him that she destroyed her last boyfriend’s car?”
“Well, maybe he won’t cheat on her.”
“Heh, he should go flying away in another direction, away from her!”
“Mom, it’s just a song!”
I’m so glad I spoke up. Kids need us to interpret this stuff for them.
I’ve noticed this theme of feminist revenge on talk radio shows as well. Gone are the days, I guess, when a woman realized her beau was untrue, and just cried about it.
Have you noticed this theme of revenge, of giving people what they’re due, elsewhere? I know studies show that young women have indeed become more socially destructive, as apt to destroy property now as themselves. The old rule of thumb used to be: men destroy property, women hurt themselves.