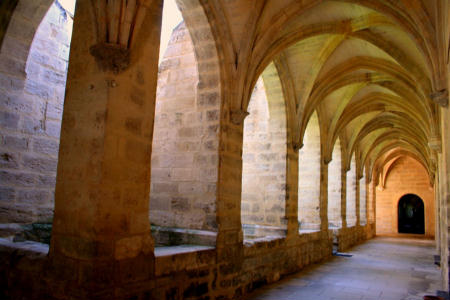 On Sunday, October 9, 2011, Pope Benedict XVI presided over Second Vespers with the Carthusian monks at Serra San Bruno. From the Chapel of that Carthusian monastery he shared beautiful  insights on silence and prayer which should be considered by all who bear the name Christian. His words brought me back to the days surrounding his election to the Chair of Peter.

Those who study the early days of Popes often watch for two things at the beginning of their service, the name they choose and the content of their first homily for clues to their pontificate. When Joseph Cardinal Ratzinger chose the name Benedict he sent a signal concerning the centrality of prayer. He has spent his pontificate teaching about that centrality.

One of the young priests offering commentary during those historic days noted that then Joseph Cardinal Ratzinger visited Subiaco before all the events in Rome began. He prayed and rededicated himself to the work of the Church for the future. Interestingly, a short while later he was called to occupy the chair of Peter. He took the name Benedict.

Saint Benedict is the father of Western Monasticism.  As a young man he fled a decadent and declining Rome to give his life entirely to God and went to Subiaco. The cave that became his dwelling is now a shrine called “Sacro Speco” (The Holy Cave). It is still a sanctuary for pilgrims. The Pope who took his name went to that same cave for prayer just before he was elected. He has not stopped showing us the way of prayer ever since.

The Pope did not enter the monastery for the rest of his life. He entered the monastery to make a point. He told the monks: “Dear brothers you have found the hidden treasure, the pearl of great value (cf. Mt 13:44-46); you have responded radically to Jesus’ invitation: “If you would be perfect, go, sell what you possess and give to the poor, and you will have treasure in heaven; and come, follow me” (Mt 19:21). Every monastery — male or female — is an oasis in which the deep well, from which to draw “living water” to quench our deepest thirst, is constantly being dug with prayer and meditation. …

“Technical progress, markedly in the area of transport and communications, has made human life more comfortable but also more keyed up, at times even frantic. Cities are almost always noisy, silence is rarely to be found in them because there is always a lingering background noise, in some areas even at night… Some people are no longer capable of remaining for long periods in silence and solitude…”

We are all called to prayer, no matter what our state in life or vocation. We are invited to build a virtual monastery in the midst of a world which has lost its soul. However, we need to grow in our understanding of what prayer is and grow in our understanding of who we are called to become in Christ. Prayer is an ongoing dialogue of intimate communion with God, through Christ and in the Holy Spirit. In an age of fast food, fast cars and fast internet, we seem to be running all the time. Yet, even with our digital calendars, we risk missing the most important meeting of all, our appointment with the Lord. We place our very selves at risk.

That is not to say that these technological advances have to be an impediment to the encounter with the Lord called prayer. Rather, when we allow them to become our measuring stick for satisfaction in every area of our lives, we will look for quick prayer and quick “results”, from what we believe are “our” efforts. Prayer is not about results or even our efforts, but about love.

In fact, prayer is really not about us at all, but about the “One” who hungers to be known and loved, the “Other”, who calls us into the intimacy of communion with Himself, in and through His Son and lives His life within us – and through us – by His Spirit. The Lord whom we seek is outside of time, having given time as a gift to those whom he now prepares for eternity. He dwells in the eternal now and invites us through prayer along a path to the fullness of life.

Preparing ourselves for prayer means learning to silence the clamor of the age, stop the ever accelerating pace of the futile quests that so often occupy our hearts, and live in the eternal now by surrendering ourselves – and even our best aspirations- to the One who created us –and now re-creates us- in His Son Jesus Christ. It is there, in the emptied place, in the stillness of the eternal now, where we prepare a room for the King of all hearts. And, in that encounter, we soon find the longing of our heart fulfilled.

The Holy Spirit is calling for a generation of contemplatives in every state in life and vocation in Christ. We tend to believe that the contemplative life is reserved for those who, by special vocation, can “leave” the world, such as contemplative monks and nuns. They are a true treasure and a prophetic sign of the life to come. However, all who are baptized into Christ are called to the same encounter with a different response.

Isaac of Ninevah was an early eighth century monk, Bishop and theologian. For centuries he was mostly revered in the Eastern Christian Church for his writings on prayer. In the last century the beauty of his insights on prayer are being embraced once again by both lungs, East and West, of the Church. He wrote these words in one of his many treatises on Prayer:

“When the Spirit dwells in a person, from the moment in which that person has become prayer, he never leaves him. For the Spirit himself never ceases to pray in him. Whether the person is asleep or awake, prayer never from then on departs from his soul. Whether he is eating or drinking or sleeping or whatever else he is doing, even in deepest sleep, the fragrance of prayer rises without effort in his heart. Prayer never again deserts him.

“At every moment of his life, even when it appears to stop, it is secretly at work in him continuously, one of the Fathers, the bearers of Christ, says that prayer is the silence of the pure. For their thoughts are divine motions. The movements of the heart and the intellect that have been purified are the voices full of sweetness with which such people never cease to sing in secret to the hidden God.”

There is a growing fascination with books about prayer and the monastic life across the entire Christian community. There is also a resurgence of interest in the Rule of Benedict and the writings of the early fathers of the Church about prayer. It all reflects the deep hunger in our hearts for God. We were made for communion with Him. Pope Benedict XVI entered the monastery to show us athe way we can all find the intimacy of that communion in the midst of our daily lives and be changed in the encounter. That way is prayer.