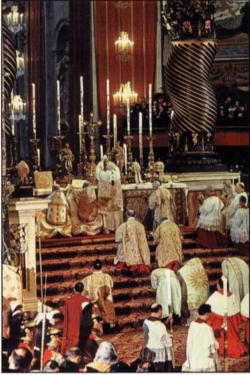 There is a Latin maxim that addresses the centrality of worship in the life, identity and mission of the Catholic Church; “Lex Orandi, Lex Credendi”. The phrase in Latin literally means the law of prayer (“the way we worship”), and the law of belief (“what we believe”). It is sometimes written as, “lex orandi, lex credendi, lex vivendi”, further deepening the implications of this truth – how we worship reflects what we believe and determines how we will live.

To the Catholic Christian, how we worship not only reveals and guards what we believe but guides us in how we live our Christian faith and fulfill our Christian mission in the world. Liturgical Worship is not an “add on”. It is the foundation of Catholic identity; expressing our highest purpose. Worship reveals what we truly believe and how we view ourselves in relationship to God, one another and the world into which we are sent to carry forward the redemptive mission of Jesus Christ.

Sadly, what may have begun as a sincere effort to simplify – itself an invitation into beauty when properly achieved – often devolved into a form of liturgical minimalism. The liturgical minimalism I speak of begins when you enter what is sometimes called the “worship space” of some contemporary Catholic church buildings. There are very few symbols anywhere. There are few if any icons or images reflecting the heavenly touching the earth, drawing the worshipper into a transcendent encounter with the God who we receive in the Most Holy Eucharist and in whom we are invited to live and move and have our being.

I am not a “traditionalist” Catholic, although I understand and respect those who are. I am just a Christian who chooses to live my faith in its fullness, as a Catholic. I love the Tradition, with a capital “T”. I am a “revert”, drawn back to that fullness of Christianity that is dynamic, orthodox, faithful Catholic life and practice. I have respect for my brethren who are Protestants in each of their various confessions and communities. However, I am not one, by choice. I do not want a Protestant looking church building or a stripped down Catholicism whose worship seems more protestant than Catholic. I do not want barren liturgy and symbol-less Catholicism.

Over the last two decades, some who purported to be liturgical experts too often stripped away the richness and the depth that draws so many to the treasure that is Catholic worship and life. Their numbers and influence are dwindling. The Catholic seminaries that are full (and their number is increasing) are filled with candidates who want the vibrant, symbolic, faithful, richly liturgical, devout fullness of Catholic faith and life. The movement toward dynamic, symbolic and beautiful Liturgy is not about going “backward” but forward and toward eternal worship.

The ecclesial movements are flourishing, drawing men and women who also want the fullness of Catholic worship, faith and life in all of its rich beauty. The new Catholics, coming into full communion from other Christian communities, are flocking to the “dynamically orthodox” and faithful Catholic parishes. The symbols are coming back into our sanctuaries and new ones are emerging.

There was a movement called Iconoclasm (“Image-breaking”) in the eighth and ninth centuries in the Eastern Church. It became a full scale heresy. The term has come to be associated with those who rejected icons, but it speaks to a contemporary problem, liturgical minimalism and the loss of the sense of the Sacred in our Churches. Icons are meant to put us in touch with the transcendent mysteries of our faith. 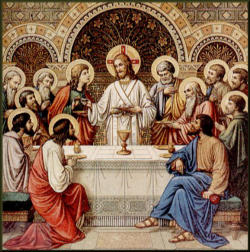 I pray with icons and have for many years. I cherish their liturgical role in the Eastern Church. In fact, one would never find an Eastern Church, Catholic or Orthodox, without icons. The contemporary “iconoclasts” are those who seek to de-mystify Christian faith, life, worship and practice. They are not the future of the Catholic Church but the past.

There are some who think that the symbols of our worship, our faith and our life are a problem. While they strip our sanctuaries and make our liturgical experiences barren, they think they have helped us by somehow making the faith more ‘relevant”, “meaningful” or “contemporary”. They are sadly mistaken and have done the Church and her mission a disservice.

They fail to grasp that, by nature and grace, human persons are symbolic. Man (and woman) is created in the image of God, and is a divine icon. Jesus Christ is the Icon of the Father. Symbols touch us at a much deeper level than words or emotive or affective participation can. They touch us at the level where authentic religion and deep worship truly begins. It is there where we hunger the most for God.

On April 15, 2010, Pope Benedict XVI addressed the Bishops of Brazil in Rome. Toward the end of his remarks he summarized the heart of good Liturgy, “Worship cannot come from our imagination: that would be a cry in the darkness or mere self-affirmation. True liturgy supposes that God responds and shows us how we can adore Him. The Church lives in His presence – and its reason for being and existing is to expand His presence in the world.”

“Lex Orandi, Lex Credendi. Lex Vivendi”. As We Worship, So we will believe and so we will live. The implementation of the revisions to the Liturgy is an opportunity for the whole Church to be authentically renewed. 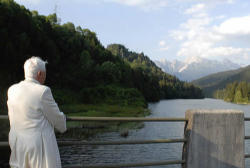