Their Eyes were Opened: The Risen Jesus accompanies us on our Road to Emmaus 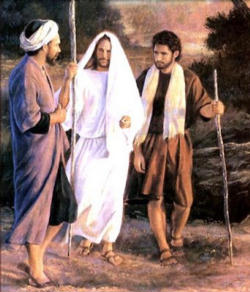 In keeping with the ancient Christian tradition the Catholic Church celebrates Easter for an octave, eight days. These days are seen as one continual celebration of the great event which forever changed human history. The octave opens into a liturgical season called Easter which concludes on the Feast of Pentecost, when the promised Holy Spirit descended upon the disciples and the Church was born in power and sent forth to continue the redemptive mission of the Risen Savior.

Our celebration of this Easter octave centers in the Eucharistic Liturgy, or “Holy Mass”. During the first part of our daily liturgies (called the “liturgy of the Word”) we hear readings from the Bible which tell of the post resurrection appearances of Jesus Christ to his disciples. Perhaps my favorite is the one recorded in Luke’s Gospel, which I read from the ambo on Wednesday of this week. (Luke 24:13 – 35) The Apostle recounts the disciples walking toward Emmaus, forlorn and perplexed over what had occurred to the Lord.  Jesus draws near to them on their journey but they do not recognize Him. This is a common theme in many of the post-resurrection appearances recounted in the Scriptures.

The disciples continue their discussion of the events which had occurred during the days before surprised that the stranger beside them seemed unaware of what had occurred. In His empathy and compassion, Jesus enters into their experience and listens. Then, he gives them the most profound expository sermon (or homily as Catholics call it) of all time. He explains the Scriptures and shows these travelers how they all referred to the Christ. He explains the very events they were recounting to him on the road. However, even after the word was broken open by the Living Word Incarnate, the disciples still did not recognize Jesus. They invited their fellow traveler to stay with them, “stay with us, for it is nearly evening and the day is almost over.”Out of the depth of the love in His Sacred Heart, He agrees. Then, we read these wonderful words:

“And it happened that, while he was with them at table, he took bread, said the blessing, broke it, and gave it to them. With that their eyes were opened and they recognized him, but he vanished from their sight. Then they said to each other, “Were not our hearts burning within us while he spoke to us on the way and opened the Scriptures to us?” So they set out at once and returned to Jerusalem where they found gathered together the Eleven and those with them who were saying, “The Lord has truly been raised and has appeared to Simon!” Then the two recounted what had taken place on the way and how he was made known to them in the breaking of the bread.” 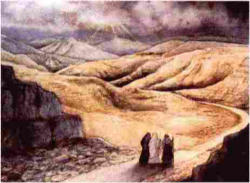 From the earliest centuries Christians have understood this great encounter on the road as referring to the Holy Eucharist, the great Sacrament of Love, wherein Jesus Christ gives Himself completely to us, body, blood, soul and divinity. This is the Sacrament we call “Holy Communion” because it brings us into communion with the Lord and, in Him with one another. Of course, in light of that, this wonderful encounter on the way to Emmaus opens up in beauty for all who reflect on it prayerfully during this Easter season.

In the light of the encounter with the Lord in the breaking of the bread, their eyes were opened. So it is meant to be with each one of us. The Holy Eucharist is more than a commemoration; it is an invitation into communion with the Living God – right now because Jesus Christ is Risen. In that encounter, the whole world looks different. That is why, in the Liturgy, the Holy Mass, we move from the Liturgy of the word into the Liturgy of the Eucharist. There we enter into the timeless gift of the Lord, given to us in this Great Sacrament of Sacraments. We, in the words of the Apostle Peter become “partakers of the Divine Nature”.  (2 Peter 1:4) The Lord comes to take up residence within us.

Among the numerous references to this fact, we find the early Christian apologist St. Justin writing to explain this early Christian teaching to the emperor in the year 155 A.D., “For we do not receive these things as common bread or common drink; but as Jesus Christ our Savior being incarnate by God’s word took flesh and blood for our salvation, so also we have been taught that the food consecrated by the word of prayer which comes from him . . . is the flesh and blood of that incarnate Jesus.”

We are those disciples on the road to Emmaus, living our lives in the real world, walking along with Jesus who is always there accompanying us on the road, whether we recognize Him or not. He listens to us, and understands us, because he became like us, in “all things but sin” as the author of the letter to the Hebrews tells us. In Him, the entire human experience has become, in the words of early Church Bishop and Father, Ireneaus of Lyons, “recapitulated”.

In the Sacred Humanity of Jesus Christ we see who we are called to become as we grow in continual communion. In this encounter with the Risen Lord, made present at every Eucharist because it is outside of time, we receive the grace we need to begin to walk the road of our daily lives differently because we have seen the Risen Lord! He walks with us on our own road to Emmaus. We learn to recognize Him, in the breaking of the bread. 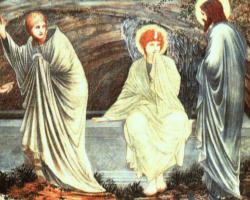