A Digital Mars Hill: Beliefnet as a “New Areopagus” 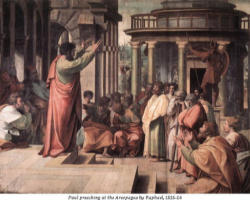 All who follow Jesus Christ in the Third Millennium are living in a new missionary age. The Culture in the West is not unlike the cultures that Christians in the first few centuries encountered. Our task is the same, to present the fullness of the Gospel message as the answer to every human longing and the path to a new life. We do so out of the greatest motivation, love. We want to give away freely what has been given to us freely, the love of God made fully manifest in Jesus Christ.

In a homily (sermon) which he delivered right before he was be chosen to succeed the late John Paul II in the Chair of Peter, Pope Benedict XVI, then Joseph Cardinal Ratzinger, referred to Western Culture as being  under the influence of a “Dictatorship of Relativism”. Relativism is an ideology which claims there are no objective truths which can be known and by which we can guide and govern our life. Rather, that everything is “relative”. The echo of this error resounds every time we hear the notion that there is “your truth” and “my truth”. In short, to the proponents of relativism, there is no objective truth.

The Christian claim is quite different than the emptiness of relativism. It contends that there is truth – and that it can be known. In fact, the Christian claim is that Jesus Christ, the Second Person of the Blessed Trinity, the Incarnate Word of God, is Himself, in the words recorded in the Gospel of St John, the “Way, the Truth and the Life” (John 14:6). Further, that Jesus Christ is the path to the Father and the true revelation of who each one of us can become, by grace.

The Christian claim is that by being baptized in to His Body, which is the Church, we are made new and capacitated to live differently.  Our choices matter. In a very real sense, we do not just make choices, our choices make us. St. Paul told the Christians in Corinth, “whoever is in Christ is a new creation: the old things have passed away; behold, new things have come.” (2 Cor. 5:17)

For the Catholic Christian, to belong to Jesus Christ is to belong to His Body. Participation in the Church is not an optional extra, but the place where we live our lives “in Christ” for the sake of the world. The early Christians would never have even considered a churchless Christianity. Here are a few expressions which confirm this truth of the essentail nature of participation in the Church from early Christian leaders:

The Bishops of the Catholic Church at the last ecumenical Council called Vatican II, in a teaching document on the Church called Gaudium et Spes (Latin for “Joy and Hope”), wrote these words, “The truth is that only in the mystery of the incarnate Word does the mystery of man take on light. For Adam, the first man, was a figure of Him Who was to come, namely Christ the Lord. Christ, the final Adam, by the revelation of the mystery of the Father and His love, fully reveals man to man himself and makes his supreme calling clear.” We discover the fullness of what it means to be a human person in Jesus Christ. Through Him, we also find the way to our own authentic freedom and flourishing.

I write this column as a “revert” to the Catholic Church; one who returned home to the Catholic Church by choice. Though, as a child, I was baptized as a Catholic and reared in a family which identified as Catholic, I wandered far away from the Catholic Christian faith. As a teenage hippie, I searched for truth, in many diverse places. That search led me on a very circuitous path. I was, before the word became as popular as it is today, a seeker.

In this column I will discuss the reasons for this choice and explain the Catholic Christian faith. We will consider together what it means to be a “Catholic by Choice”. We will ask – and answer- questions about what Catholics believe and why. For example, we will consider what Catholics believe about salvation; the Bible, the Church, the Sacraments, the Resurrection of the Body; our relationship with the world – along with a host of other matters concerning the Catholic faith, which is ever ancient and ever new.

We will do so in this virtual worldwide place called Beliefnet – where believers of various religious traditions gather and where seekers come to explore.

One of my favorite missionary encounters is recorded in the Acts of the Apostles, the book in the New Testament which records the growth of the early Christian Church. It is found in the 17th chapter. It recounts the Apostle Paul’s missionary encounter in Athens, where he preached “Jesus and the Resurrection” to all who would listen. Some Athenians, who were philosophers, brought Paul to the Areopagus, on Mars Hill, where he was asked to explain the faith which he professed.

We read this account, “So Paul, standing in the middle of the Areopagus, said: “Men of Athens, I perceive that in every way you are very religious. For, as I passed along, and observed the objects of your worship, I found also an altar with this inscription, ‘To an unknown god.’ What therefore you worship as unknown, this I proclaim to you.” (Acts 17:22, 23)

Paul, formerly known as Saul, became a follower of Jesus and His “Way”. This term, “the Way”, was used to describe the early Christians before they were even called Christians at Antioch. (Acts 11:26, 22:4) Paul embraced this faith after severely persecuting the early Church. From the moment of his encounter with the Risen Christ – which is recounted in three places in the Acts of the Apostles – he sought to tell everyone who would listen to Him the Good News. This is what the word “Gospel” means.

It is Paul’s manner in the Aereopagus which will be our model. In a sense, Beliefnet is a virtual Aereopagus, a digital Mars Hill. It is a very special place for dialogue at the beginning of the Third Millennium, a new missionary age. Paul presents a model for the kind of interreligious dialogue which we can be engaged in this digital Mars Hill. He did not compromise his claim or alter his message. He showed respect and courtesy for his listeners as he proceeded to proclaim the fullness of the Gospel. That is the goal of “Catholic by Choice.”

There is a hunger in the heart of every man and woman for God and for truth. Blaise Pascal referred to it as a “God shaped vacuum” and the Bishop of Hippo, Augustine, expressed it in his Confessions, where he recounts his own journey to the Catholic faith, in these words, “You have made us for yourself, O Lord, and our heart is restless until it rests in you.”

read next post
More blogs to enjoy!!!
archives most recent
More from Beliefnet and our partners
previous posts