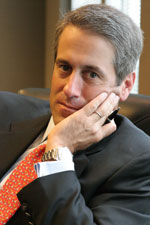 By Mark DeMoss, president of The DeMoss Group and a supporter of Mitt Romney for President
I have something in common with Jimmy Carter, Bill Clinton, Al Gore, and, Mike Huckabee—we all claim affiliation with the Southern Baptist Convention, meaning we would all profess to be “born again” Christians. Personal faith has moved front and center in this presidential primary season thanks in large part to the candidacies of Mike Huckabee, who has run as much as a Southern Baptist preacher and a “Christian leader” as a former governor, and Mitt Romney, a former governor with a now well-known Mormon heritage.

Thank you for visiting Casting Stones. This blog is no longer being updated. Please enjoy the archives. Here are some other blogs you may also enjoy: Faith, Media and Culture Prayer, Plain and Simple Happy Reading!!!

Same-Sex Marriage: Are the People Sovereign, or is it to be the Courts?

On Nov. 4, 2008, the people of California, Florida and Arizona joined the ranks of the nearly 40 of the United States that have outlawed same-sex marriage either by amending their respective state constitutions or by passing appropriate legislation. The three states mentioned above amended their state constitutions by the following margins: California (52%), Arizona […]

Social conservatives and defenders of traditional marriage won tremendous strategic victories in ballot initiatives on Nov. 4. First and foremost, the defenders of traditional marriage overturned the California Supreme Court’s legalization last June of same-sex marriage. Despite being outspent nearly 2 to1 and having to overcome California Attorney General Jerry Brown’s arbitrary decision to rewrite […]

All Americans should take great pride and satisfaction in the election of an African-American as president of the United States. Given our nation’s tragic racial history, it says something noble and fine about America that Barack Obama, both a product of a biracial marriage and the son of a Kenyan father, could be elected to […]