From the Mirror of Love by Saint Aelred, Abbot: Christ, the model of brotherly love 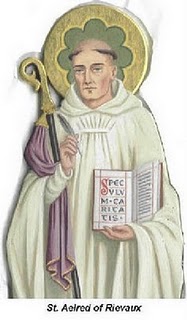 The Abbot Aelred is described by Jocelin of Furness, a contemporary, in the his Life of St Waldef:

“He was a man of fine old English stock. He left school early and was brought up from boyhood in the court of King David with Henry, the king’s son, and Waldef. In the course of time he became a monk, afterwards abbot of Rievaulx.

His school learning was slight, but as a result of careful discipline in the exercise of his acute natural powers, he was cultured above many who had been thoroughly trained in secular learning.

“He drilled himself in the study of the Holy Scripture and left a lasting memorial behind him in writings distinguished by their lucid style, and wealth of edifying instruction, for he was wholly inspired by a spirit of wisdom and understanding.

“Moreover, he was a man of the highest integrity, of great practical wisdom, witty and eloquent, a pleasant companion, generous and discreet. And, with all these qualities he exceeded all his fellow prelates of the Church in his patience and tenderness. He was full of sympathy for the infirmities, both physical and moral, of others.”

In the “Breviary”, The Liturgy of the Hours for March 18, we read this excerpt from the saintly Abbot:

Christ the Perfection of Brotherly Love

“The perfection of brotherly love lies in the love of one’s enemies. We can find no greater inspiration for this than grateful remembrance of the wonderful patience of Christ. He who is more fair than all the sons of men offered his fair face to be spat upon by sinful men; he allowed those eyes that rule the universe to be blindfolded by wicked men; he bared his back to the scourges; he submitted that head which strikes terror in principalities and powers to the sharpness of the thorns; he gave himself up to be mocked and reviled, and at the end endured the cross, the nails, the lance, the gall, the vinegar, remaining always gentle, meek and full of peace.

“In short, he was led like a sheep to the slaughter, and like a lamb before the shearers he kept silent, and did not open his mouth.

Who could listen to that wonderful prayer, so full of warmth, of love, of unshakeable serenity –

“Father, forgive them” – and hesitate to embrace his enemies with overflowing love? “Father”, he says, “forgive them”. Is any gentleness, any love, lacking in this prayer?

If someone wishes to love himself he must not allow himself to be corrupted by indulging his sinful nature. If he wishes to resist the promptings of his sinful nature he must enlarge the whole horizon of his love to contemplate the loving gentleness of the humanity of the Lord. Further, if he wishes to savour the joy of brotherly love with greater perfection and delight, he must extend even to his enemies the embrace of true love.

But if he wishes to prevent this fire of divine love from growing cold because of injuries received, let him keep the eyes of his soul always fixed on the serene patience of his beloved Lord and Saviour.”

All my hope lies in your great mercy: Saint Augustine, bishop
archives most recent
More from Beliefnet and our partners
previous posts