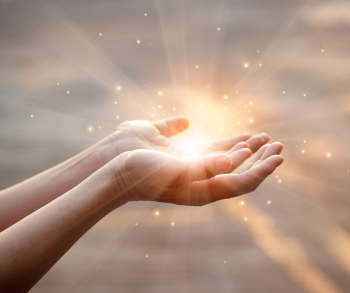 I grew up in a religiously, culturally and gastronomically Jewish home in Willingboro, NJ which is a suburb of Philadelphia. Our family went to synagogue weekly, practiced holiday rituals,  lit the candles on Friday night, but kept kosher only when my paternal grandmother lived with us. I attended Hebrew school until I was 16. I found myself rebelling against some of the teachings in my late teens and early 20s since the the rabbi of our congregation was sexist and didn’t believe that women had equal value spiritually. It wasn’t until I was in my early 30s that I embraced Judaism again after meeting Rami Shapiro   who led the congregation called Beth Or, my husband and I joined when we lived in South Florida. His ideas were in alignment with my own, that had an interfaith flavor to them. I gave myself permission to engage in buffett style spirituality by which I could choose my own flavor.

He is what he calls a ‘Holy Rascal’ and I am honored to be one too. I am a rabble rouser whenever I can be since the status quo keeps us entrenched in what may not serve us well. I was encouraged to ask questions throughtout my childhood. At 61, that has not changed.

I ponder the meaning of spirituality which I differentiate from religion. The former is about the connection between my heart and mind and the God of my understanding and the latter is about the structure, dogma and doctrine that at times seems meant to control and prevent freedom of thought. In my 40s, I was ordained as an interfaith minister after graduating from a two year program, called The New Seminary that was founded by a rabbi, priest, imam and minister; which sounds like the opening line to a joke. When I contemplate my own spiritual beliefs, they come in the form of seeing all as One. They are reflective of The Force in Star Wars; the life force energy that permeates everything. Although I am not an atheist, I was a guest on the Atheists in Recovery Podcast that highlighted the idea of using The Force to aid in recovery from addictions.

I  have no right to tell anyone what to believe spiritually, my own son included. We sprinkled ideas and shared our values as he was growing up.  I can’t speak for his father, but from my perspective, I left the door open for him to forge his own way. He would deny that he is spiritual, but I see that he has a good heart, cares about people and walks his talk. As he is preparing to be a father (as I am writing these words, my grandson is due any day), I imagine he is examining his path and how he will raise this tiny human. He and his wife, who was raised Catholic and attends Mass weekly, want to incorporate both traditions. She asked to go to synagogue with me and requested a menorah a few years back for Hanukkah.

On Christmas Day, I sat with them and her parents, brother and sister in the church she attends. The feeling of much needed peace permeated. The priest (a monseignor) offered the service in a way that I wish all clergy would. No talk of hellfire and brimstone. No, ‘do it our way or else’.  Welcoming. Inclusive. As I gazed around the chapel, I noticed people from various cultures. Afterward, I approached him and complimented him on all of it. He told me that the church had raised $10, ooo to donate to a charity that benefits immigrants at the border. My heart soared when I contemplated that this would be the congregation my grandson might grow up in. I am also affiliated with two interfaith communities and one synagogue that are embracing and inclusive as well.

That is the upside of my experience. Most of the communities I participate with are peace and social justice oriented. I am aware that many are not. When I contemplate the abuses perpetrated by representatives of various faiths, I am appalled. For many, these clergy are stand-ins for God and not to be questioned. What damage must have occurred in their own lives that allows them to perpetrate against others? What reinforcement takes place in the institutions themselves that permits them to continue? What can be done to repair the damage? No amount of money can restore body sovereignty and soul safety. How to reconcile the comfort some find in their faith with the horrors that fly in the face of deep communion with God and community?

Another area of contention for me is the perhaps well intended teachings of the Orthodox branch of my own Jewish faith. In the most fundamentalist form, it is restrictive of women and the right to dress as they choose, simply because it may be too distracting to men if they don’t. The sheltering of children from the exposure to the world outside their enclave, keeps them from making informed choices about how they will live once they reach adulthood. They are indoctrinated with fear as the teacher. Threats of Divine disapproval loom large if they step out of line. In my opinion, it stunts growth when people are discouraged from questioning. Proscribed gender roles are limiting to everyone. We  are considered to be made in ‘God’s image and likeness,’  yet I prefer to think of it as ‘God’s essence and energy’ that is constantly shifting.

I have what I call ‘Godversations’ with the Divine every day and tell ‘It’ that I am open to guidance that will help bring about healing for all those harmed by the twisting of the teachings of love.

When we recognize our own divinity, we are less affected by the damaging teachings that permeate all religions.

“You are one thing only. You are a Divine Being. An all-powerful Creator. You are a Deity in jeans and a t-shirt, and within you dwells the infinite wisdom of the ages and the sacred creative force of All that is, will be and ever was.”
― Anthon St. Maarten, Divine Living: The Essential Guide To Your True Destiny