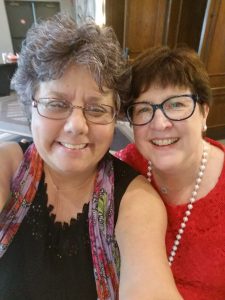 I love to ponder the thread that connects people and events. Roll back the clock to 1972. Sitting on a wooden slatted bench, painted blue if memory serves, two chlorinated, sun-burned latex bathing-suited 14-year-olds struck up a conversation. Swimming on “two different teams together,” according to one of them, that chat (I don’t even recall what words were spoken) evolved into a 45-year friendship. Barb and I grew up in the South Jersey town of Willingboro, NJ and were competitive swimmers. Our community was comprised of nine neighborhoods and each one had their own swim team. She swam for Country Club and I swam for Pennypacker. Friendly competition ensued. What I do remember were countless hours of exploring life, the Universe and everything as only teenagers can. We listened to musicals and Barb acted in many. She grew up in a Polish Catholic family and I grew up in a Russian Jewish family. We shared holidays (Christmas and Easter at her house and Passover and Chanukkah at mine). I went to public school and she went to Catholic school. She was my parents ‘third daughter’. My father called her ‘Barbie Doll’.  Since I find that life has a sense of humor, when she met the love of her life, his name was Glenn Cohen (a nice Jewish boy). They married and when they became parents, they raised their kids in the Jewish religion. Years later, Barb converted to Judaism.

Each child (Alex, Blake, Cady and now Dara…my mom called them the A B C D kids) stood at the bimah (the altar) at their synagogue and became a Bar or Bat Mitzvah. Today was Dara’s turn. This well rounded, intelligent, creative, athletic kiddo crossed the threshold of adulthood in the Jewish religion as she helped lead the service, read from the Torah and recited the Haftarah. She donned the ritual prayer shawl known as a tallis (Hebrew pronunciation ‘tallit’) that her grandmother made for her as she had for her two older sisters. Her parents offered their blessing for her and of course, cried. They definitely weren’t alone.

During the service Alex, Blake and Cady read this poem. Of course, I teared up since it speaks so powerfully to what children all over the world face. The disgraceful part is that those who are supposed to protect children are the monsters spoken about here. Our own government is abusing children with their horrific policies. My friends have raised their kiddos to be socially conscious.

We Pray for Children

We pray for children
who sneak popsicles before supper,
who erase holes in math workbooks,
who can never find their shoes.

And we pray, for those
who stare at photographers from behind barbed wire,
who can’t bound down the street in a new pair of sneakers,
who never “counted potatoes,”
who are born in places where we wouldn’t be caught dead,
who never go to the circus,
who live in an X-rated world.

We pray for children
who bring us sticky kisses and fistfuls of dandelions,
Who sleep with the cat and bury goldfish,
Who hug us in a hurry and forget their lunch money,
Who squeeze toothpaste all over the sink,
Who slurp their soup.

And we pray for those
who never get dessert,
who have no safe blanket to drag behind them,
who watch their parents watch them die,
who can’t find any bread to steal,
who don’t have any rooms to clean up,
whose pictures aren’t on anybody’s dresser,
whose monsters are real.

We pray for children
who spend all their allowance before Tuesday,
who throw tantrums in the grocery store and pick at their food,
who like ghost stories,
who shove dirty clothes under the bed,
and never rinse out the tub,
who get visits from the tooth fairy,
who don’t like to be kissed in front of the carpool,
who squirm in church or temple and scream in the phone,
whose tears we sometimes laugh at
and whose smiles can make us cry.

And we pray for those
whose nightmares come in the daytime,
who will eat anything,
who have never seen a dentist,
who aren’t spoiled by anybody,
who go to bed hungry and cry themselves to sleep,
who live and move, but have no being.

We pray for children. Amen

from We Pray for Children, 1995, William Morrow publishers

I was invited up to read a poem called A Rainbow of Friends during the service as well.  I joked as I walked to the front of the sanctuary, that Barb knew me well enough to have printed it out in 14 point bold so that my aging eyes could read the words. Since I am Barb’s flower child friend, they specifically chose a reading rainbow that celebrated diversity.

During the reception I found myself chatting with family and friends of Barb and Glenn’s including his aging parents Alan and Cookie who I have known since they were far sprier. It was a bittersweet experience seeing them need a wheelchair (he) and canes (she) to get around. Their generation is dwindling. My parents and Barb’s parents have since passed.

When Barb and I met, we were only a year older than Dara and her friends. As I watched Dara do her thing, my mind tumbled back 46 years ago when I was 13 and although practiced, was reallllllly nervous when it was my turn to be on the bimah and become a Bat Mitzvah.

The new generation-my son and daughter-in-law who were there as well and Barb and Glenn’s kids are the ones who will lead the way into what I pray will be a much more loving, equitable, compassionate, socially conscious and equitable future. 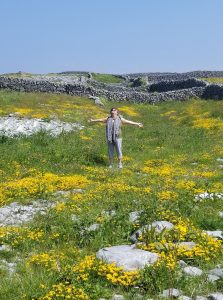