Born To Stand Out 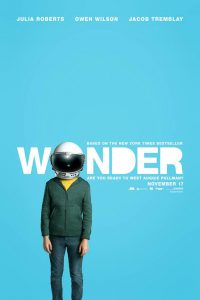 I’m a sucker for heart-tugging movies, especially those that highlight characters who overcome seemingly unfathomable obstacles. From the moment I saw the trailer for Wonder (based on the best selling book by the same name, written by graphic designer and author R. J. Palacio (Raquel Jaramillo), I was certain that I would watch it and be moved by it. My premonition played out as I sat in a darkened theater on a Saturday afternoon surrounded by others I heard sniffling and clapping along with me at various times throughout the 113-minute portrayal of the life of a child whose physical appearance shocked some, delighted others (his loving family), disgusted some and inspired others. The main character is August (Auggie) Pullman (played by Jacob Tremblay) who had a congenital condition called mandibulofacial dysostosis, which is also known as Treacher Collins Syndrome. Multiple surgeries left his face scarred and his social scope limited since he was homeschooled by his mother Isabelle (Julia Roberts) so he would not face the penetrating stares of children and adults. His father, Nate is portrayed by Owen Wilson and his older sister Olivia; called ‘Via’ is rendered by Izabela Vidovic. The principal, Mr. Tushman. played by veteran stage, screen and television actor Mandy Patinkin provides comic relief, as well as solid wisdom. Mr. Browne (played by Davveed Diggs) is the homeroom teacher and another voice of conscience who guides the children to understand that kindness matters more than nearly anything and that character is based on what we do each day; the ways we comport ourselves.

The family rallied around Auggie as he stepped out of the protective cocoon with which they surrounded him and out into the world of a prep school to which they were now launching him. An apt metaphor, since Auggie’s rich inner life includes imagining himself as an intrepid space traveler, ensconced in astronaut gear. In his day to day life, he would only walk outside wearing a space helmet. When his parents and sister accompanied him to the courtyard that was bustling with other children, he might as well have been an alien since they viewed him as an oddity. A few weeks prior to the start of school, three students were handpicked to be his guides into this new world. One, a stage kid who talked all about her glories and performances initially, one a spoiled, entitled bully who tormented Auggie and gathered other students to join him, (the viewer discovers what seeds were planted that had him becoming Auggie’s nemesis) and lastly, one who was guilted at first to befriend Auggie, but eventually became a genuine ally. Auggie rode unpredictable waves of acceptance and harassment, drinking in the support when it showed up and expressing intense and understandable emotion when it didn’t.

Another common dynamic is what happens within the mind and heart of the ‘well child,’ who is called on, either intentionally or by choice to subsume their role in the service of supporting their sibling who receives the lion’s share of attention.

The movie is dappled with quotable lines:

“When given the choice between being right or being kind, choose kind.”

“I think there should be a rule that everyone in the world should get a standing ovation at least once in their lives.”

“Kinder than is necessary. Because it’s not enough to be kind. One should be kinder than needed.”“The best way to measure how much you’ve grown isn’t by inches or the number of laps you can now run around the track, or even your grade point average– though those things are important, to be sure. It’s what you’ve done with your time, how you’ve chosen to spend your days, and whom you’ve touched this year. That, to me, is the greatest measure of success.”

This film should be shown in every school, in faith communities, in scout troop meetings, in community gatherings, at the White House, to adults and children alike. Kids don’t come into the world hardwired for bullying behaviors; they are inculcated by the adults around them.

Remember, “You can’t blend in when you were born to stand out.”

read next post
Who Would Jesus Hate?
archives most recent
More from Beliefnet and our partners
previous posts