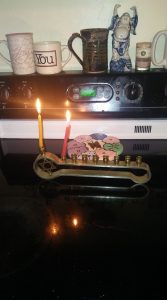 My friend Kai Karrel came into my life in the past five or six years as a teacher of spiritual ideology that he puts into direct practice. He refers to himself as a “writer, a poet, a mystic and a spiritual adventurer.” He is a divinely human and humanly divine soul brother. Kai spent years in a rather austere ashram and emerged with insights that guide his life and inspire others. One of my favorite stories about him relates to his love of high test coffee that might, on the surface, fly in the face of the disciplined life he had lived.

“One of the root meanings of the word Hanukkah is initiation. The story tells us of an oil lamp that lasted eight nights instead of just one allowing the Menorah to be a source of light and illumination.

One of the spiritual meanings to this beautiful holiday also called the ‘Festival of Lights’, is the initiation into trust. An initiation into the knowing that we are plenty, that our inner source of inspiration never knows lack. That if we trust and accept, open and allow, our lives will forever be illuminated.”

Raised Jewish, Hanukkah has always been a celebrated-in-the-home holiday in my childhood and to this day, allows me to acknowledge my roots and honor the light within us all. Lately, my own light seems to have been flickering, with the fear that it will be extinguished. Never prone to depression or anxiety, I have been noticing an uptick in both. I might attribute it to the state of the world, post election. As an empath, I have been known to absorb, like a sponge, the feelings of those around me. As a therapist, I am in the thick of things with clients who have been riding an emotional roller coaster. Add to that, the holiday season (anniversary of my husband and mother’s deaths and a recent passing of Michael’s 98 year old Aunt Kitty, who was the family matriarch), with the call to be full of cheer, when there are times when I’m just not feelin’ it. On top of that are financial/career issues and I have been on quite the wild ride. One final cherry on top of the not so sweet sundae is feeling under the weather physically.

Last night, I trekked to my son Adam and his fiancee’ Lauren’s place, to celebrate Christmas with her family. It was a joyous and low key time where we enjoyed each other’s company, basking in the glow of the tree, engaging in an Italian Catholic tradition of The Feast of the Seven Fishes and watching a bit of the holiday classic, It’s A Wonderful Life. Just my speed at a time in my life when being a recovering Type A+; not satisfied to be merely Type A,  (I have long been an overachiever) necessitates, not only slowing down, but stopping completely. Driving home, little traffic, (Aunt Kitty used to muse that “Everyone must already be at their destination,” when she would note that there were few cars on the road.), drinking in the twinkling lights that embellished buildings along the way, remembering doing that with my parents when I was a child. Even though we didn’t celebrate Christmas in our home, we still appreciated some of the traditions of our neighbors and friends. I lit the candles for the first night of Hanukkah and watched as the light steadily burned; liquidating my fears a bit, as the flame did for the yellow and red wax.

This afternoon found me bundled under a quilt on the couch, while the sun beamed through the half circle window in my living room, warming me up and melting my soul that has felt frozen lately. A sinus/respiratory yuck-fest over the past week, has me immersing in solitude this afternoon, rather than time with family. I did get out this morning to Circle of Miracles for the holiday service. On the way home, I stopped at the Shrine of Our Lady of Czestochowa. It is where I go sometimes to commune with Mother Mary; a nice Jewish girl who had a pretty important role to play in the spiritual realms. There is a grotto on the grounds where people leave petitions for intercession and tokens of appreciation. Today, I wrote down the words that were in my heart and tucked it into a notch in the wall. I left a green crystal heart that I found in my backpack. Although I wasn’t raised Catholic, the place has special meaning for me. The first time I visited, I was in my mid teens. My BFF Barb, her mother and I went there for the annual Polish festival. It felt like the other end of the world. (something like an hour from our South Jersey town) Amazingly, as an adult, I end up living 10 minutes away.

When I was speaking with Mary, I was walking in circles around the center of the grotto and surrendering my beliefs to let go of what was holding me back. With each step, I found myself closer to a truth. I know better than to ask ‘why?’ something is happening, since the answer is always, “Because it is.” The real question that beckons a constructive response is, “what?” as in what are the next steps I am to take? I await my marching orders.

I sometimes forget, as Kai said, “that our inner source of inspiration never knows lack.”

I go back and forth between seeing myself as co-creator who has a hand in everything and at the effect of a decidedly benign Divine with a sometimes bizaare and twisted sense of humor. I assure myself in the midst of doubt that everything I ever worried about or fretted over has worked out better than I imagined. 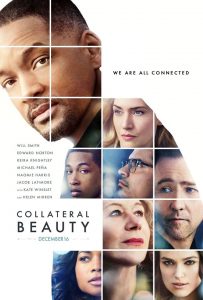 Collateral Beauty: A Movie Review
archives most recent
More from Beliefnet and our partners
previous posts