The Life You Chose

This morning as I was driving to an appointment, I was musing about the direction my life has taken in the past year or so. Twelve months ago, I was employed full time as a web content writer, working from home and bringing in more income than I ever did as a social worker. I felt a sense of freedom financially that was unfamiliar to me. I was able to easily pay my bills and have plenty left over to save, donate and spend as I chose. I was responsible and not frivolous with spending. And then….. a year and three months after I was hired, the company was faced with budget cuts which meant laying off a large portion of our creative team. I found myself only in a mild state of panic, knowing that I would be able to rebound quickly. I did, with a new job in less than two weeks that looked like it would be long term, until…..a few months later, the non-profit was not able to get the funding it needed to keep me on. Since then, I have been doing all sorts of free lance writing, teaching, coaching, counseling and editing. Although I have been able to pay bills, there has remained an underlying sense of trepidation that I won’t be able to do so. I’ve needed to be more frugal than I was a year ago.

I question the pattern that I have been following. The consistent paycheck that I had received for a dozen years as a social worker in a psychiatric hospital came at a price; my peace of mind and health. The salary and benefits that came from this other job was short lived, but it does tell me something. The woman who became my supervisor had recruited me after reading my various on line blogs; this one included.  That meant (in my mind) that Spirit was working behind the scenes to orchestrate that job. Even so, there is something unconscious going on that has placed me on the career roller coaster ride I have been on for several decades. I have prayed about it and then asked who or what am I praying to?  Is it an interventive entity or an all pervading energy? Is it my own doing, or non-doing that brings in the bucks?  Is it trust and surrender to whatever is unfolding?

Back to the road trip. Just as I was in the depths of pondering my next steps, a truck rounded the hill in the opposite direction and I laughed as I always do when I see it, since it tells me that the Universe is sending me a powerful pay-attention-to-this-one message. The truck is from a company that sells bathroom and kitchen fixtures. It is called…wait for it…Weinstein Supply Company. In case you hadn’t noticed, that is my last name. Whenever it shows up, it is a reminder that my needs are always taken care of and there is an unlimited supply coming from my Source. Sighing, I continued driving and the song by The Flaming Lips called Do You Realize? came on the radio on WXPN. 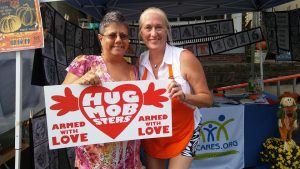 God Bless The Whole World, No Exceptions
archives most recent
More from Beliefnet and our partners
previous posts