The Other Side of Hell: Book Review 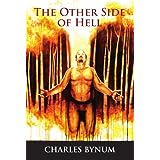 “The descent into addiction actually comes quite easily. It is the journey back that is difficult.” This line comes closest to describing the ride along as if a hitchhiker experience that author Charles Bynum takes the reader on in his book entitled The Other Side of Hell. Although I am a rapid and voracious reader, I found it breathtakingly difficult at times to keep turning the pages, as much as I wanted to. There was so much pain that the author was exuding as if from his pores, as the personal became the universal. I needed to take breaks along the way, to come up for air.  Even as a therapist and addictions counselor for decades, I had never heard such raw and real descriptions of  drug use and prison life.

Is there anyone who hasn’t felt a myriad of emotions, sometimes simultaneously that were tidal wave overwhelming and they sought desperately to staunch the flow? For Bynum, the ‘solution’ at the time, felt like drugs; meth in particular. Thus, he had immersed himself in despondence and depravity the likes of which he might never have imagined.

Depression and anger were two states of mind that enveloped him in darkness. The book begins with his frustrating dialog with his psychiatrist who seemed rather condescending. It continues with naked honesty about every step along the way. He had resisted the guidance initially and was ‘hell-bent’ to prove that what he was doing wasn’t the cause of his suffering, but rather, he felt he was at the mercy of external forces and people. Bynum embodied the classic definition of insanity of doing the same thing over and over, expecting different results. His choices; whether conscious or unconscious led to jail time. Behind the clanking prison doors lay redemption via the concept of here and now, in the moment mindfulness, rather than mind-full to overflowing with all of the beliefs he held onto that were holding on to him. Meditation became one key that unlocked the internal prison doors.

Wisdom came in the form of his first cellmate named Ray. Very much like the character of Socrates that Dan Millman writes about in Way of the Peaceful Warrior, Ray offers his perspective, in an unfolding, sometimes gentle, other times firm way. Ray helped him to see that he indeed had choices; the proverbial love vs. fear conundrum. He had the opportunity to become a monster or the man he wanted to be, when encountering another inmate who he felt dissed him; learning that he could be at the mercy of the anger or could master it. He transcended the rage that had been fueled by his belief in his own victim-hood and became a victor over it and a thriver as a result of it. Although he was still literally behind bars, experiencing de-humanizing treatment, he embraced his humanity and freed himself.

A major shift took place toward the end of the book, that belongs on the shelf of anyone who is in the addiction, mental health or law enforcement fields.  He had been at odds with his idea of what/who God is and came to a sense of peace about it as an unfolding concept. He refers to spiritual practice in a way that resonates with me. “Spiritual practice is whatever you have to do to accept things as they are.” Surrender to what is became a theme in the second portion, as he opened his journal for the reader to peruse.

Bynum now gives back by speaking with others in recovery, as well as veterans with PTSD.

Although he would tell you that he doesn’t have the answers tied up in a nice, neat little package for anyone, what he has gleaned from the tour through the inferno, offers good guidance for anyone locked in the prison of their own making. It is possible to ascend to the heaven of our choosing, as a result.