A come clean here. This morning, as I was preparing for a radio interview on which I was on the guest side of the microphone, I was slammed with overwhelming fears, feels and tears. The title of the segment on Vivid Life Radio was The Successful Freelancer and the host, Crystal-Lee Quibell invited me on her show since my work in the literary field has been many decades in the making. Writing is my passion and purpose and something I can’t NOT do. It fuels my soul and over the years, it, along with other skills helped to pay the bills. There have been times when it was the bulk of my financial support. At the moment, after a series of lay offs, it is back to being part of the seeking freelance gigs routine.

I went into this snarky dialog in my head, initiated by my inner critic that I refer to as Perfectionista, “How can you call yourself successful and offer advice to other people when you are struggling yourself?”  My protective (no name for her yet) persona was there,  hands on hips in response, standing up to her bullying, “Knock it off!” I then called in to the show and spoke with Shayne Traviss who is also the producer of my radio show, called It’s All About Relationships and explained my current state. I felt hugged over the phone as he reminded me that I was a success and that every creative person goes through doubt. I dried my eyes, donned my big girl panties and did the interview, feeling more confident as time went on.

Afterward, I called my long time friend and mentor, newly tattooed lady, Yvonne Kaye who added her vote of confidence and reminded me that I was worth investing in and that I was characteristically being tough on myself. She plays many roles in my life including, since my mother’s passing in 2010, maternal figure. I told her today that I was young enough to be her daughter. We both got a laugh out of that. Even after hanging up the phone I can still hear her Brixton-British accented voice saying, “I know you and what you have accomplished.” I could imagine her standing next to the part of me that was in protective mode as they faced down Perfectionista. She reminded me that I needed to keep on keeping on.

A third angel is a new friend on the other coast, in Portland, Oregon, named Tom Ziemann who has been an ardent and much appreciated cheerleader who came out of nowhere as we are supporting each other in living our passion and purpose. His words and actions have  touched my heart and encouraged me as well.

These folks have generously allowed me to borrow their belief in me, as my own sometimes flags at times, as much as I present as ultra-confident and when fear comes calling, they send it on its way. 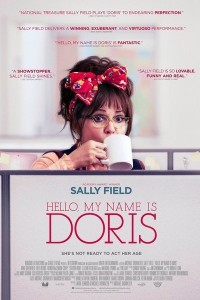 Hello, My Name is Doris: Movie Review
archives most recent
More from Beliefnet and our partners
previous posts