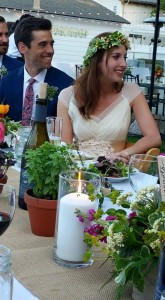 Sitting in the San Francisco airport awaiting the plane that will wing me from here to my East Coast home. The Philly airport is the destination that I will re-visit long about 10:00 tonight. Invested in a soft pink memory foam neck pillow to ease my journey and prevent a crick in the neck that has become a familiar travel companion over the years when I have awoken from much needed naps en route. Since a great deal of travel is in my future, it is a worthwhile purchase.

Got up early this morning after a night of joyfully celebrating my beautiful niece Jena’s wedding to her handsome hubby Brendan. I had the blessing of being the Officiant. Twenty eight years ago, at my own wedding, Jena was my two year old flower girl. During the ceremony, I mentioned that I believed that I married her Uncle Michael back then, in part, so I could marry her now. There wasn’t a dry eye there, as family and friends who are family of choice to her, her siblings, and aunt gathered to witness the union. It was held at the organic farm of Brendan’s parents. It could not have been a more perfect day. The weather cooperated, although I dreamed two nights before that there were torrential rains. That, in and of itself would have been a miracle, since there are drought conditions in Calistoga, where it was held. I sense that it was an analogy for the floods of love that enveloped them.  The ceremony itself was a blend of humor and profound emotion.

At dinner which was served at long tables with white lights strung across the trees, tiny votive candles and small potted plants along the burlap runners, glasses were raised over and over in toast to the couple and their grand lives together. Since the Napa Valley is home to some of the world’s most exquisite vineyards, the wine was flowing, along with happy tears. I had the feeling that we were in a Fellini movie. We danced the night away to music provided by a jazz-pop group and I found myself carried away by the music; transported to a timeless state where I felt little fatigue and delayed soreness.

One of the many ideas I spend a great deal of time musing about is that kindred spirits and soul friends are everywhere, even if they are not on our radar at the time. Brendan’s family- his mother Nanette, his father Barney and sister Genevieve would easily fit into that category. I had such poignant and in some cases,  mystical conversations with each of them. Barney I had a few such interludes in which he offered what he calls ‘hyperbole, haiku and bullshit’ as this philosopher-farmer spoke about the importance of making time for people; feeling our connection to the Divine in all we encounter. Found myself wishing that I had more time to spend with him.

At each turn, throughout my trip, I encountered miracles. I had the chance to spend a few days staying with my in-laws at the gorgeous house they were renting as I got to see a different side of them. Some of us soaked in the hot tub under the California Stars well after midnight East Coast time and I found myself, as I often do, in awe of how my life gets to be lived. I never take it for granted and breathed a prayer of gratitude.

I am also coming home with a new briefcase, courtesy of the owners of the B & B where some of the other guests were staying. The zippers on my old one broke and I had asked if there was a store nearby where I could purchase one. The shook their heads and said they had one I could adopt. I asked how much it was. The smiled and said $10. I was astounded, since one that quality would easily have cost more than $50. I love how these things show up too.

While strolling through town over the last few days, I made friends, soaked up some sun, clocked many miles, enjoyed the restorative scenery and  blessed the flow~

Brendan and Jena, may your lives be a series of serendipitous and synchronous experiences and may you live in awe and wonder of it all.