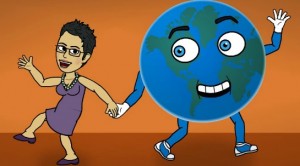 I am an earnest Earth advocate since it is the only planet we have and I want it to continue to sustain life for a long time to come. I also honor what Gaia- the Greek name for the Goddess as embodied by the Earth,  does for us each day. She hosts breathable air, drinkable water, plants, animals and human life. She does it without expectation of return AND YET, if we neglect her, like any mother, she will no longer be able to care for us. We shortsighted human beings erroneously believe that we can continue to take her for granted without consequences. Ain’t gonna happen.

On April 22nd , 1970, John McConnell, Gaylord Nelson and Denis Hayes planted the seeds for the eco-fest that now  has taken on epic proportions as the need for environmental awareness has reached a crucial level. Earth Day, according to Hayes, it is “the largest secular holiday in the world, celebrated by more than a billion people every year.”

Being environmentally conscious is more than about what we think, but also what we do. Some steps to take:

Walk and bicycle when you can, rather than drive

Take re-usable bags, not just for grocery shopping, but all purchases. They can be washed and dried

Reduce energy consumption- turn off lights when out of the room

Turn off water when brushing teeth, washing or shaving since there is no need to let it run

Run the dishwasher when full

We also feed the collective soul of the planet with our thoughts and energy. Consistently angry thoughts, hatred, and violence pollute the stream of consciousness that flows through each of us. Consistently loving thoughts clean it up.  If we embrace the planet and all inhabitants on it, we will leave a thriving home for the next seven generations.

Partner with the planet and each other.  Together we can make a difference.