The Sound of the Dove-Music Review 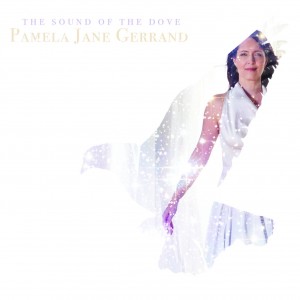 “If you could combine the compelling voices of fellow Canadians Sarah McLachlan and Loreena McKennitt, with the soaring throat notes of kirtan singer; best known as Madonna’s back up singer, Donna DeLory, you would have a sense of the magnificent tonings and tunes of Pamela Jane Gerrand. The best way to appreciate her talent is to listen to her new release The Sound of the Dove . Each piece is a sparkling gem, a wisp of feathers wafting downward to be gathered up and held to the heart.

It opens with Prairie Sky which is a sweet love song.  “I can feel the thunder rolling in. I can taste the raindrops before they begin,”  sung in a sultry voice to the heartbeat drumbeat rhythm.

“I hear the colors in my voice,” beckons the listener into this Unadorned song in which Gerrand acknowledges to one who is dear to her “You are my shelter from the storm.”

What could become an anthemic piece begs the questions ‘”How many pairs of shoes do you need?  Are we awash in an ocean of greed?” as a children’s chorus reminds us that we have  Enough Already.

Let Go is an invitation to release fear. “Let go, let go, let go the shore.  Don’t hold on so tight.  Give up the fight.”

The Buddha Smiles  speaks to spiritual uncertainty. “Where do I begin to find the strength that I lack?”  The Sanskrit mantra Om mani padme hum which  commonly translates to ‘the jewel in the lotus,’ is chanted in the background. Violin accompaniment has an ‘Eleanor Rigby’- Beatle-esque feel to it.

Shine which wonders “Can you feel the fire down deep in your soul?  Can you feel it burning so bright? Sing your song on high. Shine on, sister, shine,” invites silk scarf dancing in oak groves.

Her own rendering of Scarborough Fair departs from the Simon and Garfunkel version that sounds as if it were sung in the era about which it was written.

Emerging encourages peeking out from our contained places into the space between the notes. “We are, we are, we are, I am, we are emerging. We are merging with the light.”

I’ll Meet You There references the field that the poet Rumi spoke of “Love is simple. Love is kind. Out beyond the struggle beyond my wrong and your right, there is a field filled with light.”

The closing track Pearly Gates of Song carries with it Native American drum resonance and chanting. “We are angels in disguise. Starlight falling from your eyes.We have journeyed for so long.” Eyes closed, listening to the echoes of ancestors as they both chastise and challenge to “welcome the winds of change.”

Gerrand’s talents go beyond her song-bird serenades. All of the songs, with the exception of Scarborough Fair came from her vivid imagination and wild word wrangling. Wrap yourself in wings of wonder.