I listened to this marvelous TEDtalk  today after hearing snippets of it on the radio in the car via NPR. The speaker was Sir Ken Robinson who challenges the educational system with his belief that education is often what squeezes creative impulses from naturally talented children. He shares the story that I’ve heard told in various forms about a child who is deep in concentration,  drawing. The teacher leans over and asks about the subject matter. The little one looks up and says “I’m drawing God,” to which the teacher responds “No one knows what God looks like”, and the the wise girl smiles “They will now.”

Sir Ken then reminds the listeners that children are willing to take risks and be creative until it is criticized out of them. His definition of creativity looks like this:  Creativity= Original ideas that have value. I wonder, though…who decides what is valuable?  Is it when a person is willing to pay for a creation? Is it because someone decides they find it intrinsically beautiful or because it strikes a chord in them? The way I see it is if it meets a need in the person writing-drawing-painting-sculpting-dancing-singing-cooking-playing, then it has value. For me, creativity is as essential as oxygen. If I couldn’t create something that moves me, then I would feel without purpose and I would shrivel up and blow away in the wind. Now, I’m not sure if I heard him say this on the radio today, or if I made it up myself, that creativity is imagination put into action.

I have never seen myself as an artist, but as a writer, I have been told that I paint word pictures. I endeavor to take readers on a journey with me, as if they too are immersed in word soup; flavorful, hardy and rich. Stick to your ribs verbiage. Creativity was never ‘squozed’ out of me. In fact, it was fed to me, like the rice pudding with raisins that my grandmother made. Music, reading, silly-goofy dancing, singing, coloring and writing were all nourishing aspects of my childhood. Is it any wonder that I became a professional wordsmith who teaches people how to let their creative colors fly and flow? I bless my parents infinitely for that.

I love what Sir Ken had to share about the process of creativity. It is not a one and done event. He says that sometimes ideas come to us fully formed. I like to say that when that occurs, they come through me and not from me. Today, I visited a friend’s art studio, called Alchemy Open Studio. There I began stage 2 of designing a mosaic. I donned a white, long sleeved men’s shirt that was paint dabbled; evidence that it had been worn by other creative souls. I then pulled out the first stage mosaic piece from a few weeks ago and smeared a whole bunch of dark gray grout that I had mixed in a container, all over the broken glass. It felt grand to (while wearing gloves), glop and glide the mucky mixture all over. This creative process has required patience, since it is taking several weeks to complete and I have needed to delay gratification for the finished product. This part is equally, if not more valuable for me.  This is a photo of the ‘during’ first step. I will share the art work once it is ready for Prime Time and I will likely to be as excited as that little girl revealing the face of God. 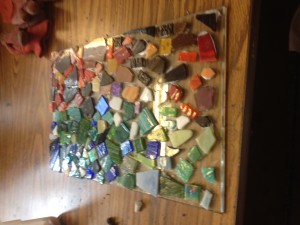