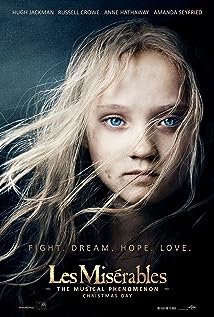 On Friday night, I joined likely millions of people world wide, watching musical-made-into-movie Les Miserable’ on the big screen. Having seen the Broadway version, I was eager to get a sense of how it would match up. Hearing raves and a few downer reviews about Russell Crowe’s less than stellar vocal range, I walked into the theater with my friend Barb with whom I had seen the show, and an open mind, but alas, no tisssues. I told her as we applauded at the end and wiped our eyes, that it would be a great idea for them to be available at the box office. Les Misérables is now the world’s longest-running musical, seen by over 60 million people in 42 countries. Add to it the numbers who have streamed into the theaters and the legend continues. I can imagine more than a few little statues coming home with the stars and film-makers of this epic portrayal of love, uprising, slavery, grace and forgiveness.

For those who may not know the story line, Victor Hugo’s classic and in some people’s opinion, one of the most important novels in human history, centers around the hero Jean Valjean who at the start of the movie, exhibits super human strength physically and mentally after serving 19 years for stealing a loaf of bread to feed his starving nephew. His nemesis is Javert who even after he is paroled, persues him doggedly. Once he leaves the galley of the ship on which he was forced to serve, he travels on foot, begging for food, shelter and honest work. He finds little of those things and after being taken in by a cleric, he steals silver which he plans to sell to survive. Caught by police, he is brought back to the house at which the Monseignor pretends that he had given the precious items to Valjean and gives him two candlesticks as well, saying he had forgotten to take them in his haste to leave. Awed by the grace exhibited by this man, he dedicates himself to God and to becoming a force for good. He dis-associates himself from his criminal past, going so far as to tear up his ID papers; thus breaking parole and taking on a new persona, that of  Monsieur Madeleine, mayor of  Montreuil sur Mer and a wealthy factory owner.  As he is walking through town, he sees that a man is pinned beneath a wagon and goes over to assist. He lifts the wagon off the man and is observed by Javert, the newly appointed constable who has seen only one other person in his life exhibit that degree of strength, so he has his suspicions of who this man  really is.

On an auspicous day, one of his workers named Fantine who is the single mother of a young girl named Cossette is outsted from her job and forced to live on the streets, sell her hair, two teeth and her body. Her daughter is in the dubious care of two unscrupulous innkeepers who extort her for money. One night,  Valjean/Madeleine witnesses her being harrassed by a potential customer, as she lashes back  and scratches the man’s face. About to be hauled off to jail by Javert; he intervenes and takes her to a hospital. There, as she lay dying, she tells him about her daughter who he then vows to care for since he had not spoken up when she was unjustly dismissed from his factory, because she would not acede to the lustful desires of a foreman. He goes to collect the girl who fantasizes about a different life than the one of abuse and deprivation at the hands of the innkeepers. There is another child in the house as well, named Eponine who is their daughter; treated like a princess.  When Valjean arrives, he gives the couple more money than they deserve but enough to whisk Cossette to a semblance of safety. Because of his past, he is still hyper-vigilant and wary of staying out of Javert’s sight. As karma would have it, they were taken in by the man Valjean had rescued from under the wagon years earlier.

On a broader scale, the country is now in revolution since poverty has become the norm and one of the revolutionaries is a young man named Marius who falls in love with the now young woman Cossette. Eponine, who is also grown sees Marius as an unrequited love interest. Cossette is now wealthy and Eponine is forced to beg on the streets. She too joins the revolution and although her heart is breaking, becomes the go-between for the two lovers.  Tensions are heating up and the students erect a barricade that also becomes their place of death.

More of the plot involves an opportunity for Valjean to show mercy to Javert, for Marius and Cossette to marry and for forgiveness to take place. What has moved me about the story is its emphasis on the idea that love in and of itself is a redemptive force that overcomes fear, anger, revenge and even the word of law. While Javert viewed his role as keeper of the peace and enforcer of the the law, it was the ‘petty’ criminal Valjean who lived the more exemplary life in terms of his ability to care for those who could at the moment, not be seen as doing him any particular good. His unveiling of his ‘wrong-doings’ to Cossette and Marius are overshadowed by the fact that he saved several lives, including that of Marius who was the only one who survived the barricades.

I love symbolism. From the candlesticks given to Valjean that to me, represented illumination in the darkness, to the eye  painted on the wall, watching over the barricade, to the structure itself which seems to be a partition between this world and the next, this movie was fraught with it.

The line that moves me beyond any other in this play is “To love another person, is to see the face of God.”  Would that we see God in the face of the homeless begger, the one who sacrifices her well being for her child, the one who steals to feed his family and yes, even the by-the-book-seeker-after-pseudo justice.